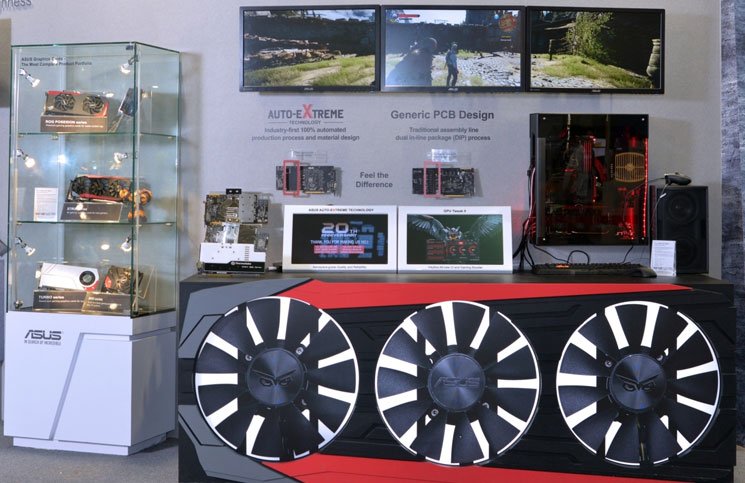 ASUS is a well-known brand for computer products such as motherboards and graphic cards. A leading enterprise in the new digital era, ASUS designs and manufactures products that perfectly meet the needs of today’s digital home and office.

ASUS recently announced new products at Computex 2015. These include new gaming gear from ASUS Republic of Gamers (ROG), ROG-series gaming monitors and peripherals, some new graphic cards et al. They have also released the new ASUS Z170 motherboard that is based on the upcoming 6th-generation Intel Core CPU.

Asus also showcased some more exciting products at the Nangang Exhibition Hall at Computex 2015, which include the complete ASUS USB 3.1 product family. Over that, they also launched the Strix GTX 980Ti graphics card and 4K/UHD (ultra-high-definition) displays.

Asus has been launching some great graphic cards every now and then. Another one in their prestigious kitty is the Strix GTX 980Ti. This one released at Computex 2015 is the latest enthusiast-gaming graphics card, with ASUS-exclusive DirectCU III technology and a triple-wing-blade 0dB fan design.

This graphic card also has ASUS Auto-Extreme technology with Super Alloy Power II components for aerospace-grade quality and reliability. This graphic card is expected to come to India in the coming few months. Stay tuned as we bring you more news from Computex 2015.

Sahiba Sethhttp://www.gadgetbridge.com
Sahiba Seth is a student, pursuing English (Hon) from Delhi University. She has been a trainer of HYTSE (Helping Youngsters To Speak English) in her school. She loves to interact with people and she is crazy about gadgets like mobiles and cameras. She likes to read and search about gadgets, and their features. She loves to stay in tune with the happenings of Hollywood and Bollywood. Also, she is passionate about reading novels and creative arts.
Facebook
Twitter
WhatsApp
Linkedin
ReddIt
Email
Previous article
Soon you would find Android technology on Mahindra & Mahindra XUV 500 and Scorpio
Next article
HTC unveils One ME Dual SIM smartphone with octa-core processor and 20-megapixel camera