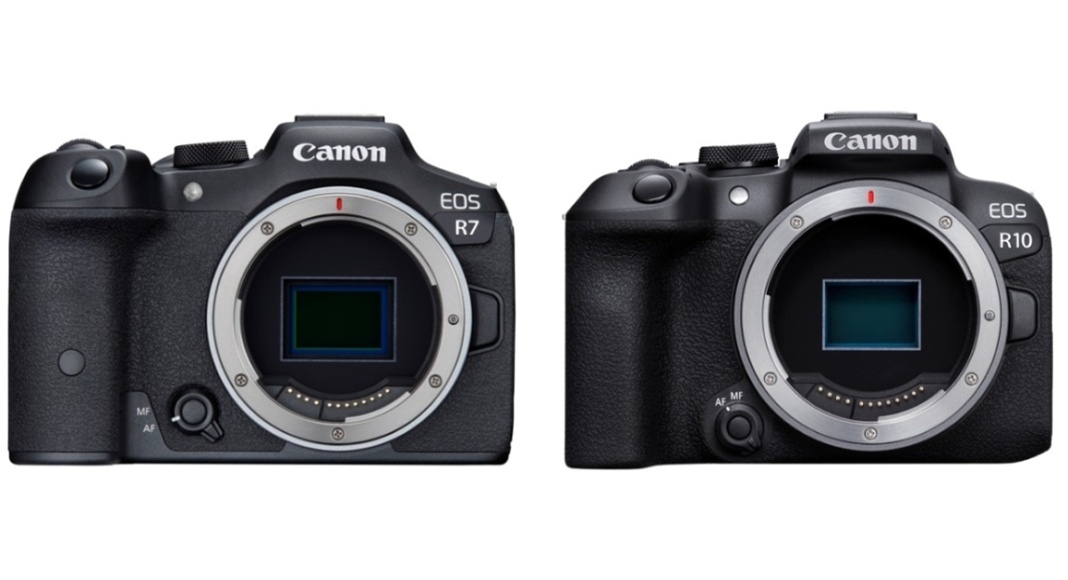 Canon has announced the release of the EOS R7 and EOS R10, the first cameras in its EOS R mirrorless system to feature APS-C image sensors. The 32.5-megapixel Canon EOS R7 features In-Body Image Stabilisation (In-Body IS), weather-sealing, and dual SD card slots. Whereas the 24.2-megapixel EOS R10, which has a built-in flash and a smaller form factor, is intended for more common day-to-day photography. Alongside, the company has also announced RF-S18-45MM F4.5-6.3 IS STM and RF-S18-150MM F3.5-6.3 IS STM, two new lenses.

The EOS R7 and EOS R10 are the first cameras to receive the new autofocusing (AF) technology that debuted on the EOS R3, thanks to the powerful DIGIC X image processing engine. This technology takes advantage of the EOS iTR AF X system’s deep learning-based subject detection capabilities to track subjects more diligently throughout the entire image area, irrespective of the AF area mode. Even in dynamic scenes, this results in highly responsive and reliable autofocusing.

Both cameras have a RAW burst mode that allows them to shoot full-resolution RAW images at up to 30 frames per second. Pre-shooting is supported, which starts recording the scene up to 0.5 seconds before the shutter is released, making it easier to capture unexpected opportunities.

Both the Canon EOS R7 and EOS R10 use newly developed 32.5 and 24.2 megapixel APS-C CMOS image sensors. Despite having the same megapixel resolution, the EOS R7’s visual resolution exceeds that of the EOS 90D and the EOS M6 Mark II, whereas the EOS R10’s is equivalent to the same two cameras. Which makes it capture fine details like silky hair, fabric textures, and other fine details that can be captured with pinpoint accuracy.

As per the company, the Canon EOS R7 is the first APS-C EOS camera to include a sensor-shift type 5-axis In-Body IS (Image Stabiliser) mechanism, which can provide up to 8 stops of equivalent image stabilisation during the video and still image shooting. The EOS R7 and EOS R10 both have Movie Digital IS, which performs 5-axis image stabilisation for smoother videos even when the lens does not have an Optical Image Stabiliser (Optical IS).

In the new 4K UHD Fine mode, the EOS R7 can use 7K oversampling to record high-quality 4K UHD video at up to 30p for content creators. In 4K UHD Standard mode, uncropped 4K 60p recording is possible. It’s also the first APS-C EOS camera to support Canon Log 3 gamma, which is useful for colour grading and HDR video production. On the other hand thanks to 6K oversampling, the Canon EOS R10 can shoot high-quality 4K UHD Fine 30p video. Both cameras are capable of recording 4K HDR PQ video.

The inherent telephoto effect of APS-C sensor cameras, which is similar to having a built-in extender, is one of their strengths. Users who frequently photograph wildlife and other subjects that require longer focal lengths will benefit greatly from this. The field of view is automatically “zoomed in” by about 1.6 times the lens’s focal length. Recording, on the other hand, uses the full resolution of the image sensor, unlike the 1.6x crop mode on full-frame EOS R cameras.

According to Canon The EOS R7’s built-in 1.6x APS-C crop can be combined with the 4K UHD crop mode for an even stronger telephoto effect of around 1.8 times the focal length when shooting video. APS-C image sensors are roughly 40% smaller than 35mm full-frame image sensors.

In terms of availability, the devices will begin selling in July.

Komila Singhhttp://www.gadgetbridge.com
Komila is one of the most spirited tech writers at Gadget Bridge. Always up for a new challenge, she is an expert at dissecting technology and getting to its core. She loves to tinker with new mobile phones, tablets and headphones.
Facebook
Twitter
WhatsApp
Linkedin
ReddIt
Email
Previous article
How To Take A Screenshot On Your iPad (2022)? Top 3 Best Ways
Next article
Top 5 Printers That Scan And Colour Print Under Rs 5,000: For Home Use