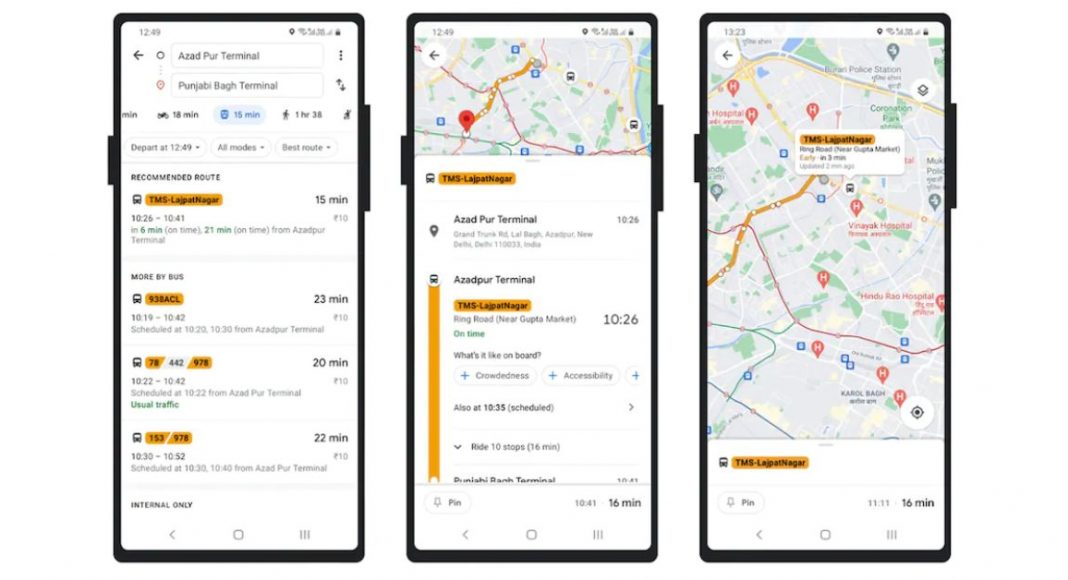 Technology giant, Google, has collaborated with Delhi Transport Ministry, Delhi Integrated Multi-Modal Transit System (DIMTS), Indraprastha Institute of Information Technology (IIIT) Delhi, and Lepton Software to introduce a new real-time bus service information feature for users in Delhi. Now the users will be able to track the timing of the DTC bus to arrive at the bus stop using the Google Maps application. Here is how you can Google Maps to know the next bus timing in Delhi.

Note that the new Google Maps has released the new real-time bus service information feature for users in Delhi only. These features will provide information related to the timings of the next DTC bus, which you can catch to reach your destination. So now onward the commuters in Delhi don’t require to stand at the but top waiting for the next bus to arrive. The real-time bus service information feature on Google Maps will also tell you how long it will take to reach your destination and will also show whether the bus is delayed or on time. The commuters will be able to track bus location, arrival/departure times, and routed on a real-time basis.

Delhi transport minister Kailash Gahlot stated “Google has teamed up with the Delhi Transport Ministry to show real-time bus information. Users will get an estimation of how long their trip is going to take, and if their bus is delayed. Google Transit will automatically update the times in line with the new conditions,” He further added, that the Status of around 3,000 buses is live. More DTC buses will be integrated soon so that people in Delhi will be able to plan their journeys to the minute. Therefore, reducing waiting time will also help in reducing crowding at bus stops and increase the accountability of public buses. As per the minister, Delhi will join the league of global cities that provide seamless real-time information of public transport.

The best part is the Google Map real-time bus service information feature is also available in Hindi so that the commuters in Delhi can navigate in their preferred language by changing the language in Google Maps settings or within the device language settings. Google has plans to expand this feature in other cities in the country and is currently working with the respective public transport services in other cities to enable the functionality.

Komila Singhhttp://www.gadgetbridge.com
Komila is one of the most spirited tech writers at Gadget Bridge. Always up for a new challenge, she is an expert at dissecting technology and getting to its core. She loves to tinker with new mobile phones, tablets and headphones.
Facebook
Twitter
WhatsApp
Linkedin
ReddIt
Email
Previous article
15 July 2021 Flipkart Daily Trivia Quiz Answers: Answer to win exciting prizes
Next article
Asus AIO 241e review: A good companion when working from home