The device comes with a 5,100mAh battery

As the more companies are offering advanced features to the smartphone more tablet users are decreasing day by day. But some of the companies such as Samsung, Huawei, Apple have still managed to offer the best Android tablets with consistently launching newer and better versions. The Chinese smartphone company Huawei has launched its latest Huawei MatePad T8 tablet in India under the budget segment. The all-new tablet comes with 8-inch display thicker bezels while offering two models, LTE and Wi-Fi variant. The device is scheduled to go on sale next week so read on to know more details about it.

Huawei MatePad T8 has been introduced in India in a single RAM and storage configuration 2GB of RAM with 32GB of onboard storage option. There will be two variants LTE and Wi-Fi models Rs 9,999 and Rs 10,999. The tablet will be available in a single colour option Deepsea Blue. The pre-orders for the device have already begun and it is scheduled to go on sale starting September 14 via e-commerce website Flipkart. During this period the company will be offering the LTE variant on a discounted price of Rs 9,999. 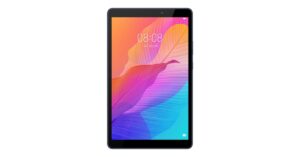 The Huawei MatePad T8 comes with a metal body and is ergonomically built lightweight and perfect for kids during these times. The device features an 8-inch LCD display with 1,280×800 pixels resolution and 189ppi pixel density. This runs on EMUI 10.0.1, based on Android 10. Under the hood, there is an octa-core MediaTek MT8768 processor paired with IMG GE8320 GPU for graphics and 2GB of RAM with 32GB of storage. The storage can be expanded up to 512GB using a microSD card.

The tablet comes with four pre-installed apps – a recorder, camera, multimedia, and Kids Painting. Making it a kid-friendly device, also the parental controls are beneficial to controlling children accessing the tablet such as setting alerts to improve your kid’s posture with the posture alert feature and it also controls ‘how much time your kid spends using the tablet’ with the time management alert among others.

The connectivity options on the tab include a dual-band Wi-Fi, Bluetooth 5.0, LTE (optional), GPS/ A-GPS, USB OTG, and a Micro-USB port.

Komila Singhhttp://www.gadgetbridge.com
Komila is one of the most spirited tech writers at Gadget Bridge. Always up for a new challenge, she is an expert at dissecting technology and getting to its core. She loves to tinker with new mobile phones, tablets and headphones.
Facebook
Twitter
WhatsApp
Linkedin
ReddIt
Email
Previous article
Confirmed: Apple to host Time Flies event to release Apple Watch and iPad Air
Next article
OPPO introduces ColorOS 11 public beta, global launch event to take place on September 14