Hurry up guys, Micromax Canvas Spark is on sale on Snapdeal 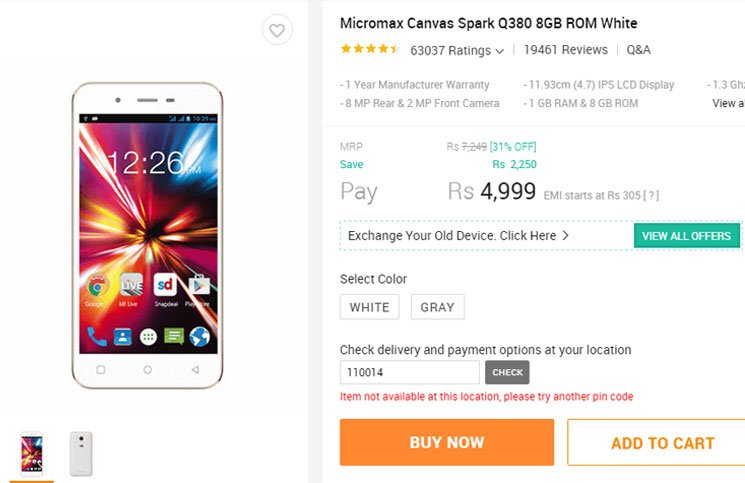 Micromax is conducting an open sale of one of their latest smartphones called Micromax Canvas Spark Q380 on Snapdeal. The sale is on for buyers on this 27 July and 28 July. The company has recently announced that they already sold 5,00,000 units of Canvas Spark since its launch in April this year.

Micromax Canvas Spark comes in two colour variations, which consist of White-Gold and Grey-Silver. The smartphone features a 4.7-inch display with 960×540 pixel resolution. Powering the smartphone is a 1.3 GHz Quad-Core processor paired with 1GB of RAM. The inbuilt storage of the device lies at 8GB, which can be expanded up to 32GB via microSD card. The smartphone runs on Android 5.0 Lollipop OS.

Micromax Canvas Spark has an 8-megapixel rear camera with autofocus and LED flash. There is also a 2-megapixel front camera. This smartphone offers 3G, Wi-Fi, Bluetooth and GPS as connectivity options. The battery size of the device is 2,000 mAh.

The most appealing feature of this smartphone is its price, which is just Rs 4,999. In order to make the buying process easy, the company has decided to go for an open sale, which requires registration and active participation of the consumers.

This is a smart move from Micromax and it is a really good deal for the buyers too.

Ajay Singhhttp://www.gadgetbridge.com
Ajay Singh might still be studying English (Hons) from DU, but his skills over the language are pretty much top notch. He wants to quickly learn the ropes of journalism. Tech and gadgets fascinate him. His passion for the same drives him to research about new things tech. He tries to stay on top of gadget news. If there is a new tech toy launched, we are most likely to go up to him for its news. He likes to read and is crazy about travelling. He is also a cricketing ace and cannot resist a good Dosa.
Facebook
Twitter
WhatsApp
Linkedin
ReddIt
Email
Previous article
Samsung brings the latest Galaxy Tab A Plus tablet, India might get it soon
Next article
Xiaomi reduced the price of Mi 4 (64 GB) in India to Rs 17,999