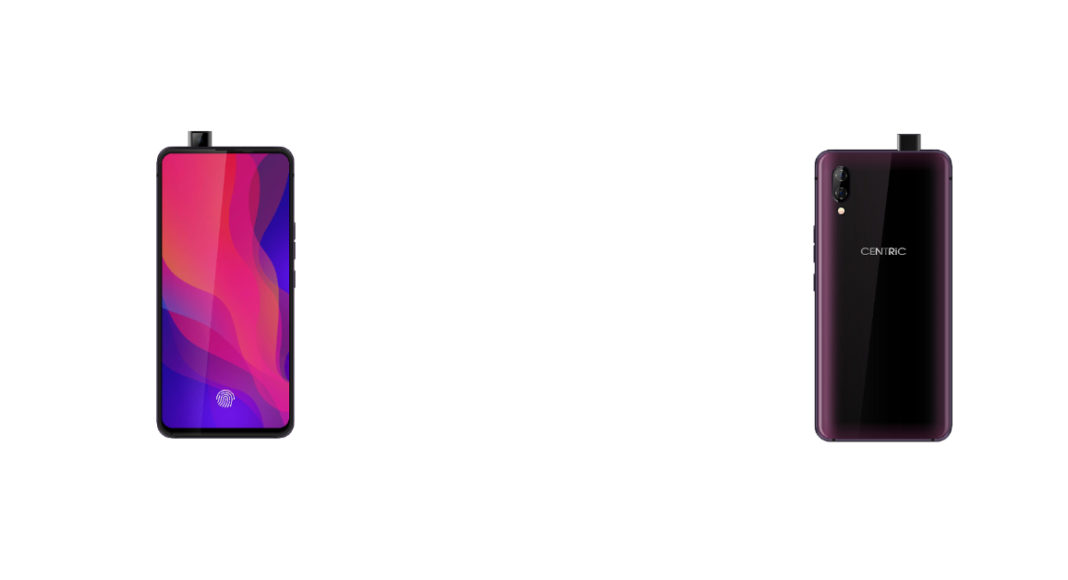 CENTRiC, an Indian smartphone manufacturer has launched its first pop-up selfie camera smartphone named CENTRiC S1 at the ongoing MWC 2019 in Barcelona, Spain. The smartphone also comes with a Pump Express 3.0 fast charging which, according to the company, can charge 50% of the device’s battery in 20 minutes. Besides the CENTRiC S1 the company has also unveiled four of its other smartphones named -L4, A2, G5 and G3.

The CENTRiC S1 smartphone is available at a price of $310 (approximately Rs 22,030) and it will start selling in the Indian market from June 2019.

CENTRiC S1, L4, A2, G5 and G3 features and specifications

The costliest of the smartphones, CENTRiC S1 comes with an in-display fingerprint scanner as well as face unlock feature. It has two variants, 4GB RAM + 64GB storage variant and the other with 6GB RAM + 128GB storage model. The smartphone sports a 6.39-inch Full HD AMOLED display with tear-drop notch, it has 92% screen-to-body ratio and has an aspect ratio of 19:5:9. It is powered by MediaTek Helio P70 Octa-core CPU and its display brightness is up to 700 Nits. The device runs on Android Pie out of the box and comes with a dual rear camera setup that has a 16MP primary sensor and a 5MP secondary sensor. The front camera of the device will be a pop-up selfie camera holding an 8MP sensor. It is backed by a 3,800mAh battery that has support for fast charging and wireless charging.

Manish Agrawal, Managing Director of CENTRiC smartphones said, “With CENTRiC, our focus has always been on expanding our customers’ ability to resonate with our technology. We waited for the right moment to bring the best products that encompass the digital needs of new-age consumers. The new CENTRiC S1 perfectly syncs with the customers and their desire to update themselves with the latest advances in digitization. Fast charging, popup selfie camera, wireless charging are the growing necessities to enhance the consumer experience.”

“The resounding success of CENTRiC’s launch event at MWC 2019 is a promising step in the right direction to foray into the global market with our product offerings.” he added.

CENTRiC G5, which is one of the five smartphones launched by the company features a 6.21-inch HD display that has an aspect ratio of 19:9 and comes with a tear-drop notch on top. The smartphone is powered by a MediaTek Helio P22 Octa-core processor and it houses 4,050mAh battery. The device has a dual rear camera setup of a 13MP primary sensor along with a 2MP secondary sensor with auto focus and it houses an 8MP selfie camera on its front panel. Other features of CENTRiC G5 include fingerprint scanner and face unlock. It too runs Android Pie out of the box and is available in only one variant – 3GB RAM and 32GB storage.

CENTRiC G3 sports a 6.23-inch Full HD notched display that has an aspect ratio of 20:9. The smartphone runs MediaTek P60 octa-core processor and has a 3,800mAh battery. Just like the CENTRiC G5, it too comes in only one variant that has 4GB RAM and 64GB storage. There is a dual rear camera setup on the smartphone that has a 12MP primary sensor and a 5MP secondary sensor. The front panel houses an 8MP selfie camera. There is a fingerprint scanner on the back for unlocking the phone. The CENTRiC G3 is the upgraded version of the CENTRiC G5.

Speaking of, the CENTRiC A2 smartphone, it features a 5.86-inch HD notched display with an aspect ratio of 19:9. It is powered by a MediaTek Helio P22 Octa-core Processor and comes with 3GB RAM and 32GB storage. Like all the other smartphones mentioned above the CENTRiC A2 runs Android Pie out of the box. The device has a dual rear camera setup with a 13MP primary sensor and a 5MP secondary sensor and an 8MP selfie camera on the front panel. The smartphone is backed by a 3,400mAh battery.

The cheapest and the smallest smartphone of the lot is the CENTRiC L4. The smartphone has a 5.45-inch HD display but unlike the other smartphones, it doesn’t come with a notch. It is powered by MediaTek MTK6739 1.5GHz quad-core processor and runs Android 8.1 Oreo out of the box. It comes with 2GB of RAM and 16GB of internal storage. But even though it is the cheapest of the lot, it comes with a fingerprint scanner. It is backed by a 2,950mAh battery and has a 13MP AF OptiVu camera at the back with dual LED flash and an 8MP selfie camera.

Aman Singhhttps://www.gadgetbridge.com/
Aman Kumar Singh has a Masters in Journalism and Mass Communication. He is a journalist, a photographer, a writer, a gamer, a movie addict and has a love for reading (everything). It’s his love of reading that has brought him knowledge in various fields including technology and gadgets. Talking about which, he loves to tweak and play with gadgets, new and old. And when he finds time, if he finds time, he can be seen playing video games or taking a new gadget for a test run.
Facebook
Twitter
WhatsApp
Linkedin
ReddIt
Email
Previous article
Nubia Alpha smartwatch with a foldable display unveiled at MWC 2019
Next article
MicroSD Express standard with improved speed announced at MWC 2019