Infinix Note 7 set to launch in India today: Here is what is expected

When launched this will be available via Flipkart in India 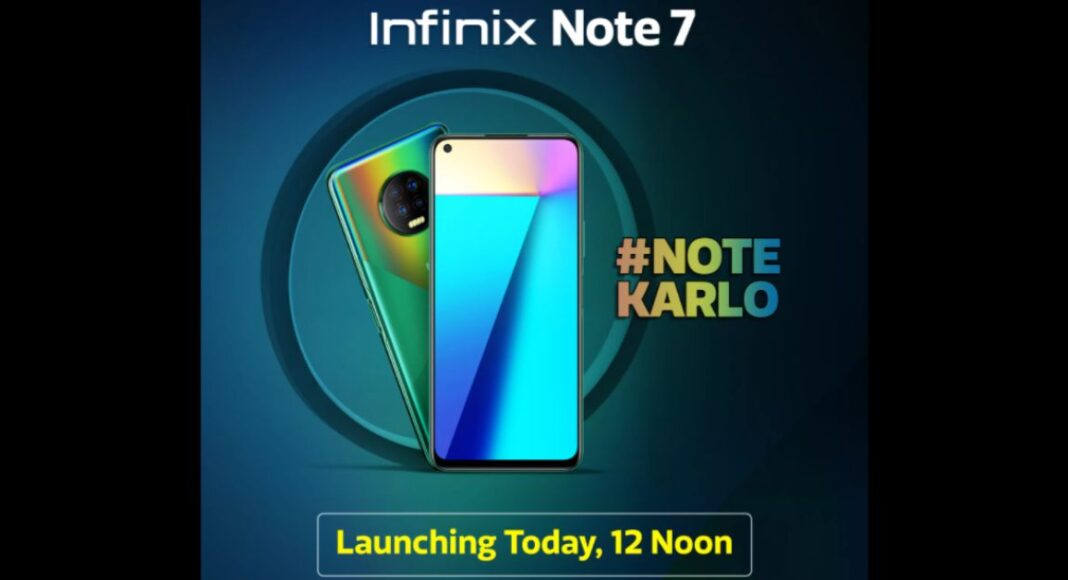 Infinix will be launching the Infinix Note 7 in India today. To recall the device was unveiled back in April this year alongside it toned down variant Note 7 Lite in Kenya and the Philippines. Ahead of the launch, the device was also listed on the e-commerce website Flipkart to reveal its availability. Before making its debut in India the device is already available in several other regions. The smartphone comes with a circular rear camera module, a hole-punch display, 5,000mAh battery and is powered by an octa-core MediaTek processor.

As we have already mentioned that Infinix Note 7 is already available in other markets. As per the Philippines pricing the device made its debut there with a price tag of PHP 7,990 that translates to Rs 12, 100 for the single 6GB RAM with 128GB storage variant. There it was launched in Aether Black, Bolivia Blue, and Forest Green colour options.

Infinix Note 7 comes with a 6.95-inch HD+ IPS LCD Infinity-O display offering 720 x 1,640 pixels of resolution with a 20.5:9 aspect ratio along with a hole punch to house a selfie camera. It is powered by an octa-core MediaTek Helio G70 processor, which is paired with 6GB of RAM and 128GB of internal storage which can be expanded using a microSD card. It runs on XOS 6.0 UI baked on top of Android 10 OS. The device houses a side-mounted fingerprint scanner and a 5,000mAh battery supported by an 18W fast charger.

On the camera front, the Infinix Note 7 sports a quad rear camera set up that includes a 48-megapixel primary camera with f/1.79 aperture, a 2megapixel macro camera, a 2megapixel depth sensor, and a low-light video camera. While on the front there is a 16megapixel selfie snapper on the display at the top left corner.

The connectivity option on the phone includes 4G LTE, Wi-Fi 802.11ac, Bluetooth, GPS/ A-GPS, Micro-USB, and a 3.5mm headphone jack. For sensors, there is an accelerometer, ambient light, magnetometer, and a proximity sensor.

Komila Singhhttp://www.gadgetbridge.com
Komila is one of the most spirited tech writers at Gadget Bridge. Always up for a new challenge, she is an expert at dissecting technology and getting to its core. She loves to tinker with new mobile phones, tablets and headphones.
Facebook
Twitter
WhatsApp
Linkedin
ReddIt
Email
Previous article
September 16 Amazon Quiz: Answer all the questions to win Redmi Note 9 Pro
Next article
Xiaomi introduces Champagne Gold colour variant for Redmi Note 9 Pro Max and Redmi Note 9 Pro in India