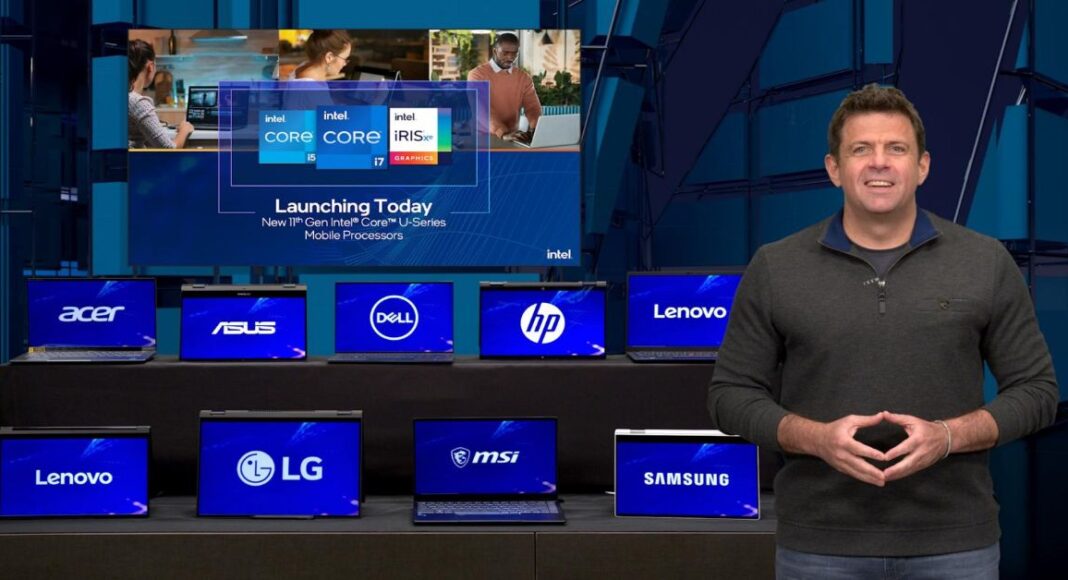 Intel has expanded its lineup of 11th Gen Intel Core mobile U-series processors with the addition of two new chipsets. The company has introduced Core i7-1195G7 and Core i5-1155G7 paired with Intel Iris Xe graphics specifically designed for slim and lightweight laptops at Computex 2021. In addition to this, the company has also announced a 5G M.2 modem for laptops.

“We’ve taken the world’s best processor for thin-and-light Windows laptops and made the experience even better with the addition of our two new 11th Gen Intel Core processors with Intel Iris Xe graphics. In addition, we know real-world performance and connectivity are vital to our partners and the people who rely on PCs every day, so we’re continuing that momentum with more platform capabilities and choice in the market with the launch of our first 5G product for PCs: the Intel 5G Solution 5000.” –Chris Walker, Intel corporate vice president and general manager of Mobility Client Platforms

According to the company, the two new chipsets are the company’s first to have got 5.0 GHz clock speed in its top of the line U-series. It offers up to 25% overall application performance advantage over the competition. Both the processors come with Wi-Fi 6/6E (Gig+) for improved connectivity.

On the other hand, Core i5-1155G7 has a base clock speed of 2.5GHz  and can achieve a  speed of 4.5GHz. These chipsets will come with ISV optimizations for up to eight times faster transcoding and up to twice the video editing speed over the competition. In addition to this, these will also offer 1080p gameplay on new and popular titles, such as Valheim, with up to a 2.7 higher frame rate than that of the competition.

Apart from this Intel has also introduced its first 5G M.2 solution which comes with worldwide carrier certification. It delivers nearly five-times speed increases over Intel  Gigabit Long-Term Evolution (LTE) from anywhere for which it has partner with  MediaTek on product definition, development, certification and support of 5G modem solutions for the next generation of PC experiences and Fibocom to supply 5G M.2 solutions (FM350-GL).

As per the tech giant, Acer, ASUS and HP are among the first OEMs expected this year to enable modern connected laptops with the Intel 5G Solution 5000 based on 11th Gen Intel Core U- and H-series processors.

Komila Singhhttp://www.gadgetbridge.com
Komila is one of the most spirited tech writers at Gadget Bridge. Always up for a new challenge, she is an expert at dissecting technology and getting to its core. She loves to tinker with new mobile phones, tablets and headphones.
Facebook
Twitter
WhatsApp
Linkedin
ReddIt
Email
Previous articleCOVID Helpline in India: Here is a list of apps and websites you can refer to
Next articleJune 01 Amazon Quiz- Answer these five questions and you could win Rs 15,000