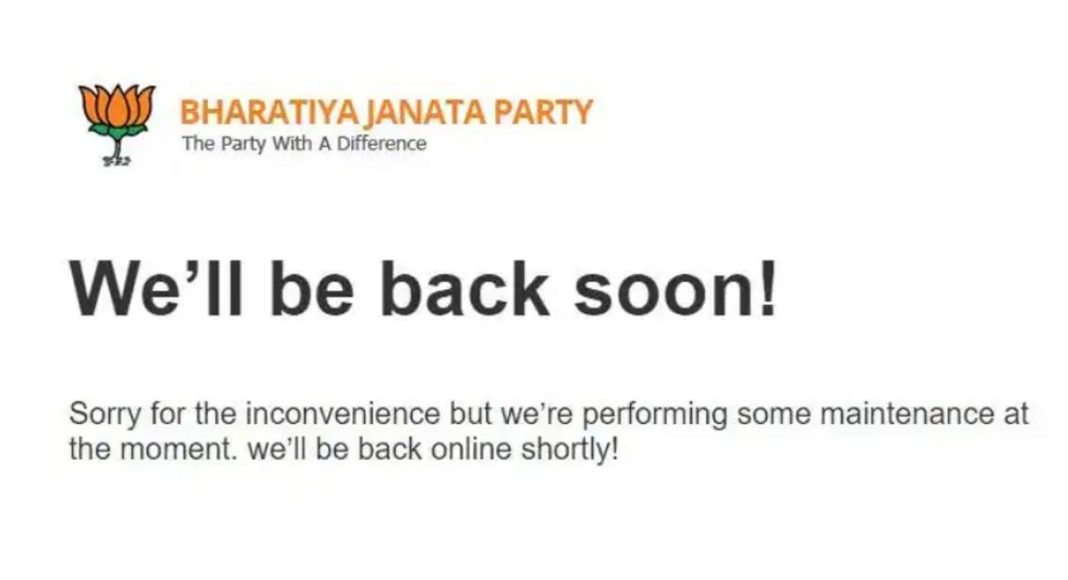 It’s been more than a week since Bharatiya Janata Party (BJP)’s official website was hacked. The website was taken down last week and has remained under ‘maintenance’ mode till now. Following the incident, IT Minister Ravi Shankar Prasad has confirmed that the website has been hacked.

At the “Digital India Summit” currently being held in New Delhi, the minister said, “There are rogue elements in the society. The site was hacked only for a few minutes. We got back control very soon.”

With this statement, the IT Minister admitted that the BJP website was hacked and it comes as a first-time admission from the government. But Prasad did not mention when the site will be back online as it has been more than a week since the site has been labeled as ‘under maintenance’.

When trying to access the website, a message reads: “We’ll be back soon! Sorry for the inconvenience but we’re performing some maintenance at the moment. We will be back online shortly!”

The BJP IT cell head Amit Malviya last week said the site was not hacked but he did admit that the website had experienced some sort of ‘transgression’. Further, he stated that the website was down because of a ‘technical glitch’ rather than being hacked. But a week ago, the official website of BJP showed abusive content, which clearly means that the website was hacked.

There was also a video with the song ‘Bohemian Rhapsody’ posted below the meme. The identity of the hackers hasn’t been confirmed yet and no hacker group has claimed responsibility for the act.

The news has gained huge traction in the past few days as Twitter users are posting things and memes about the BJP’s website hack.

As of now, no official comment has been made about when the website will be back online.

Aman Singhhttps://www.gadgetbridge.com/
Aman Kumar Singh has a Masters in Journalism and Mass Communication. He is a journalist, a photographer, a writer, a gamer, a movie addict and has a love for reading (everything). It’s his love of reading that has brought him knowledge in various fields including technology and gadgets. Talking about which, he loves to tweak and play with gadgets, new and old. And when he finds time, if he finds time, he can be seen playing video games or taking a new gadget for a test run.
Facebook
Twitter
WhatsApp
Linkedin
ReddIt
Email
Previous articleIBM used Flickr photos of people for facial recognition training without their consent
Next articleGoogle Services restored back to normal after a global outage