The service will be launched commercially on September 5 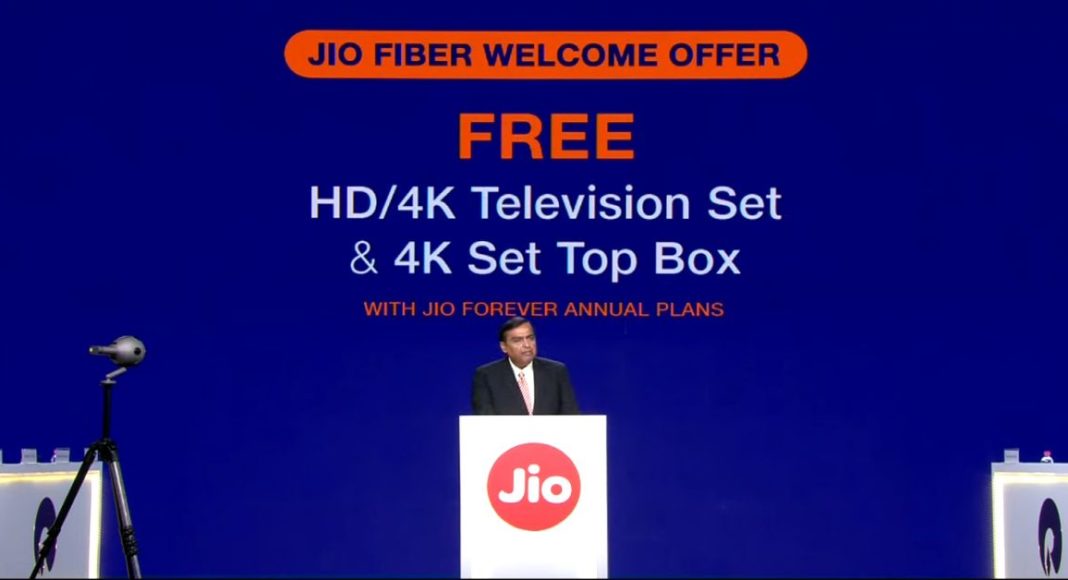 Reliance Jio at 42nd Annual General Meeting of Reliance Industries Limited on Monday announced the launch of the optical fiber-based fixed-line broadband service, JioFiber, in India. The new broadband service by Reliance Jio will be available from September 5, the third anniversary of Reliance Jio. In addition to this the company also announces other services like Jio set-top box, Jio Postpaid Plus plans for JioFiber users, the Jio Fiber Welcome Offer as well.

“Over the past year, we have built significant momentum in our JioFiber rollout and we are confident that we will complete our network rollout within the next 12 months.” Said Mukesh Ambani, Chairman Reliance Industry

JioFiber announcements were made during the 42nd AGM of the RIL. Jio Fiber will be commercially launched on September 5. The plans will fall between Rs 700 and Rs 10,000 per month.  More details about the tariffs will be available from September 5 on Jio.com and MyJio application.

The Fiber customers can take the benefit of up to 1GBPS fast broadband speed along with this the users will also get a free landline phone connection.

JioFiber plans will start from 100Mbps and with this service the users can take the benefit of free voice calls from home to any Indian operator whether it is mobile or fixed. The company has also announced the lowest fixed-line rates for international calling along with unlimited international calling pack for calls to the US and Canada by just paying Rs 500 per month.

The consumers will also be able to take advantage of the Jio Fiber mobility service called Jio Postpaid Plus. This service will provide priority SIM set-up service at home, family plans with data sharing, international roaming, and phone upgrades at preferential rates.  More details will be available on the Jio.com and the MyJio app when the Jio Fiber service will be launched commercially.

Moreover, the company has also announced Jio Fiber Welcome Offer. When the user opts for the Jio Forever plan they will get a Free FullHD TV or Home PC along with a 4K set-top-box free.

Komila Singhhttp://www.gadgetbridge.com
Komila is one of the most spirited tech writers at Gadget Bridge. Always up for a new challenge, she is an expert at dissecting technology and getting to its core. She loves to tinker with new mobile phones, tablets and headphones.
Facebook
Twitter
WhatsApp
Linkedin
ReddIt
Email
Previous articleXiaomi is all set to launch Mi A3 in India
Next articleRealmi 3i will go on sale in India on Flipkart and Realme Online Store today