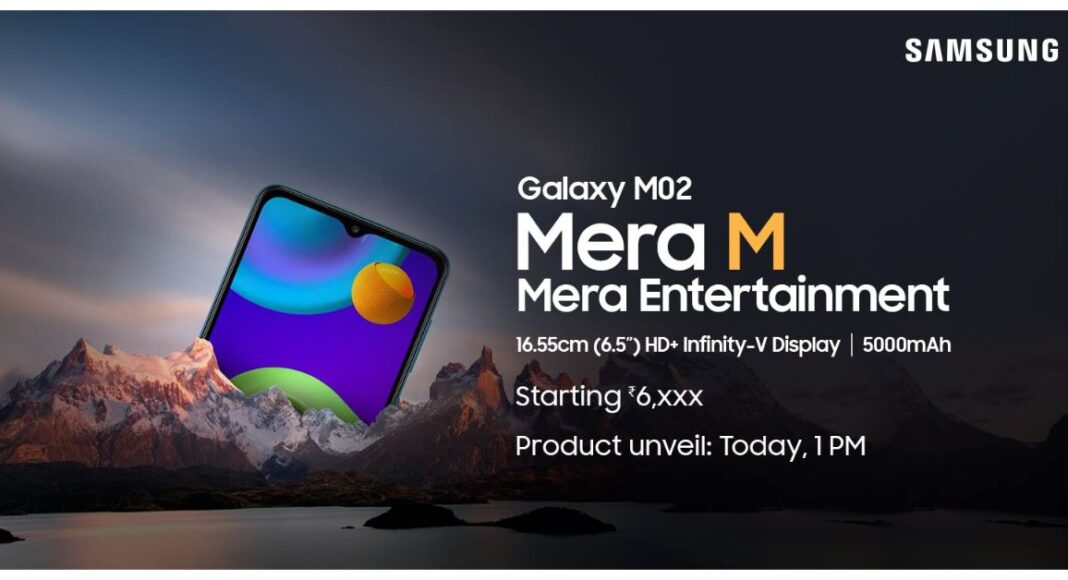 With the kickstart of the new month of February two new phones, Samsung Galaxy M02 and Poco M3 are set to launch in India today. The Samsung smartphone is the successor of the Galaxy M01 on the other hand the Poco phone will succeed Poco M2 which was launched last year in the country. The specs of the Galaxy M02 are yet to be announced whereas we are very much aware of the specs of the Poco M3 as it has already made its debut in the US a few months back. Read on to know about the expected pricing and launch details of both smartphones.

Samsung Galaxy M02 is going to launch today in India. As per the dedicated landing page for the upcoming smartphone created on Amazon, the launch event will take place via an online launch event starting at 1 PM. The device is stated to fall under Rs 7,000 and will be a successor of Galaxy M01 which was launched in June last year.

The specification of the Galaxy M02 has not been officially revealed but the company has confirmed that it will feature a 6.5-inch HD+ Infinity-V Display. In addition to this, it will pack a 5,000mAh battery. The device is also rumoured to be a rebadged variant of Galaxy A02s which debuted in Europe in November last year. There it is made available in two variants of 3GB RAM with 32GB storage and 6GB RAM with 128GB onboard storage option.

As per the Geekbench listing, it will come with Android 10 out-of-the-box. The phone’s single-core score is 128 and has achieved a multi-core score of 486. Furthermore, the device is expected to be powered by an octa-core Qualcomm Snapdragon 450 SoC, paired with 3GB of RAM.

It's time to switch to killer looks & OP performance! Watch the #POCOM3 launch Livestream on 2nd Feb’21 at 12PM https://t.co/OSUNEmLtcu

Speaking of the specification Poco M3 will run MIUI 12 for Poco based on the top of Android 10. Under the hood, there is an octa-core Qualcomm Snapdragon 662 SoC paired with 4GB of LPDDR4X RAM and up to 128GB of onboard storage. The phone will be featuring a 6.53-inch full-HD+ display offering 1,080×2,340 pixels of resolution with a screen-to-body ratio of 90.34 percent and a 19.5:9 aspect ratio. The display is protected with a layer of Corning Gorilla Glass.

Moreover, there will be a 6,000mAh battery that comes with 18W fast charging support. In addition to this, it will also feature an Infrared (IR) blaster and a side-mounted fingerprint sensor to unlock the phone.

Komila Singhhttp://www.gadgetbridge.com
Komila is one of the most spirited tech writers at Gadget Bridge. Always up for a new challenge, she is an expert at dissecting technology and getting to its core. She loves to tinker with new mobile phones, tablets and headphones.
Facebook
Twitter
WhatsApp
Linkedin
ReddIt
Email
Previous article
Top 5 mechanical gaming keyboards you can find in India under Rs 5,000
Next article
Itel A47 smartphone launched in India at Rs 5,599