Poco M3 set to make its debut in India on February 2, will be available for purchase via Flipkart

The device was launched in the US last year in November 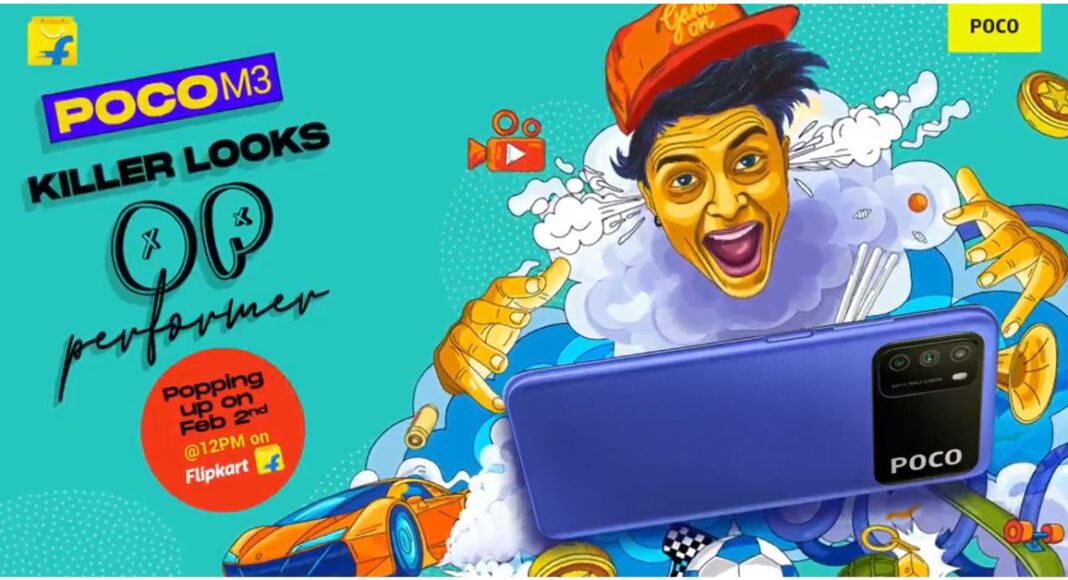 Xiaomi’s sub-brand Poco is all set to launch its new smartphone in the Indian market. Last year in November Poco M3 made its debut in the US which is now set to enter India on February 2. The company has begun teasing the arrival of the smartphone a few days back and now it has officially declared the launch date for its upcoming product. The device is powered by Qualcomm Snapdragon 662 SoC and houses a 6,000mAh battery. In addition to this, it has a triple rear camera setup too. The device is a successor to Poco M2.

The Chinese smartphone company took to Twitter to confirm its upcoming mobile phone, In addition to this, the company also did confirm that the phone will be available via Flipkart and the launch event will be live-streamed at 12 noon onwards. Poco is yet to reveal more details on the online live stream for the event soon.

Poco M3 features a 6.53-inch full-HD+ display offering 1,080×2,340 pixels of resolution with a screen-to-body ratio of 90.34 percent and 19.5:9 aspect ratio. The display is protected with a layer of Corning Gorilla Glass. The device runs MIUI 12 for Poco based on the top of Android 10. It is powered by an octa-core Qualcomm Snapdragon 662 SoC paired with 4GB of LPDDR4X RAM and up to 128GB of onboard storage.

The smartphone packs a 6,000mAh battery that comes with 18W fast charging support. For connectivity, Poco M3 includes 4G LTE, Wi-Fi, Bluetooth, GPS/ A-GPS, a 3.5mm audio jack and a USB Type-C port for charging. Furthermore, there is an Infrared (IR) blaster and a side-mounted fingerprint sensor to unlock the phone.

Komila Singhhttp://www.gadgetbridge.com
Komila is one of the most spirited tech writers at Gadget Bridge. Always up for a new challenge, she is an expert at dissecting technology and getting to its core. She loves to tinker with new mobile phones, tablets and headphones.
Facebook
Twitter
WhatsApp
Linkedin
ReddIt
Email
Previous articleJanuary 28 Flipkart Daily Trivia Quiz Answers: Answer to win exciting prizes
Next articleSamsung Galaxy A02 with dual rear cameras and 6.5-Inch Infinity-V Display launched