May 23 Amazon Quiz: Answer all the questions to win Fossil Explorist Watch 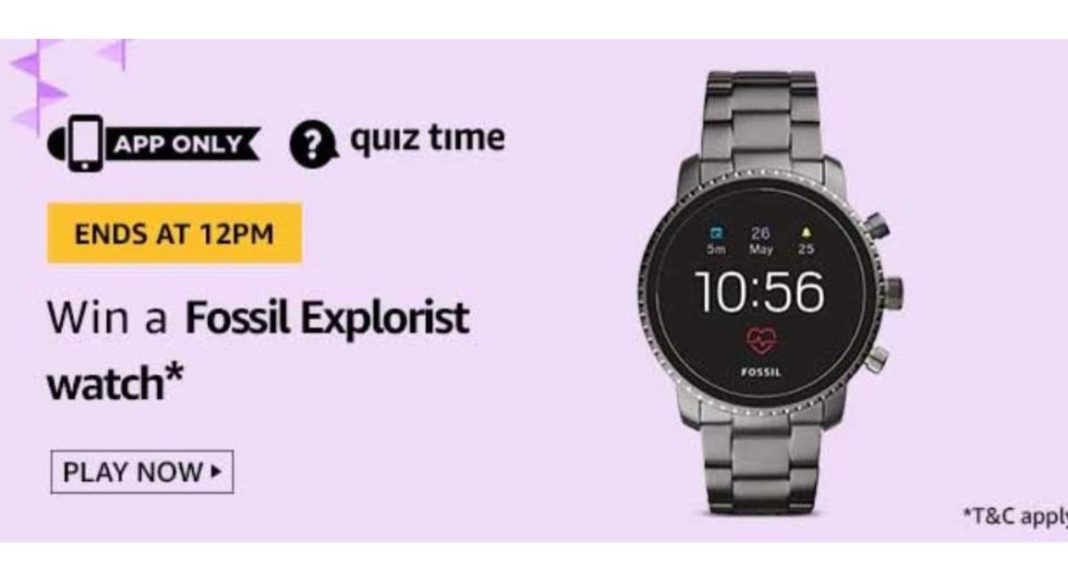 The e-commerce platform is back with another new quiz on its platform. The Amazon Quiz can be played daily on the mobile app that goes live via mobile app. All you need to do is answer all the questions correctly and win free products and goodies such as gadgets and Amazon Pay Balance up to Rs 50,000, today you have a chance to win Fossil Explorist Watch.

May 23 Amazon Quiz has gone live and a new set of questions have also been updated. The daily quiz on the Amazon app has become the hottest topic as it gives a chance to win its customers exciting free gifts. In today’s Amazon quiz you have a chance to win Fossil Explorist Watch. The quiz contains only five questions that are based on current affairs and general knowledge. Answering all the questions correctly will get your name selected for a lucky draw. Only one person will be selected as the winner and the results are announced at the end every month. The lucky ones might win something by answering all the questions correctly, and the wrong answers will get you eliminated from the quiz. To participate and win check out today’s answers of the Amazon Quiz.

Question 1: May 12 is celebrated as International Nurses Day to commemorate the anniversary of whose birth?

The Answer is- Florence Nightingale

The Answer is- Shakuntala Devi

The Answer is- South Korea

Question 4: Recently discovered HR 6819 is the closest-known of what celestial phenomenon/object to Earth?

The Answer is- Black Hole

The Answer is- North Macedonia

Komila Singhhttp://www.gadgetbridge.com
Komila is one of the most spirited tech writers at Gadget Bridge. Always up for a new challenge, she is an expert at dissecting technology and getting to its core. She loves to tinker with new mobile phones, tablets and headphones.
Facebook
Twitter
WhatsApp
Linkedin
ReddIt
Email
Previous articleThe upcoming RedmiBook laptops confirmed to be powered by AMD RyzenTM 4000 series processors ahead of the launch
Next articleMay 24 Amazon Quiz: Participate to win Vivo S1 Smartphone