Mi 11 Ultra registrations open, expected to go on sale in India on July 7 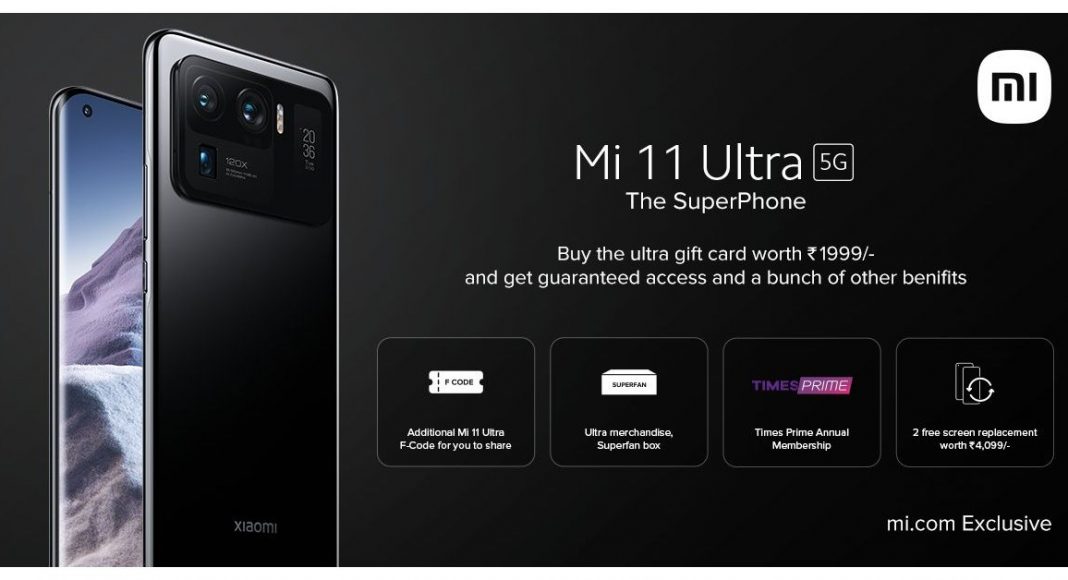 It has been almost 2 months since Xiaomi’s latest flagship Mi 11 Ultra launched in India. The device arrived with 2 more handsets, which are already on sale in the country but till now the company has not announced when the flagship phone would be available for purchase. Reportedly, the device is expected to go on sale on July 7 but as per the company, it would be available in limited quantity for customers purchasing a dedicated gift card and for the ones participating in an online contest.

According to a report Xiaomi is expected to begin the first sale of Mi 11 Ultra in India on July 7. The company has previously postponed the sale of the flagship smartphone while it was given a green signal in the international market. To recall, Mi 11 Ultra debuted in India on April 23 and at the time of the launch the company did not announce the exact timeline of the sale. However, the company did reveal the pricing of the phone which is Rs 69,999 for the 12GB of RAM with 256GB storage. The device will be available via mi.com and Amazon in the country.

Recently, the sale registrations were announced for Mi 11 Ultra in which Xiaomi has detailed several offers for the first sale of its flagship. As per the company, the buyers will get two free screen replacements worth Rs 4,099. In fact on each pre-booking, Xiaomi will be providing 1 Ultra Merchandise Superbox of the first sale. Additionally, the pre-bookers will also get Times Prime Annual membership. The SBI Bank customers will be entitled to get Rs 5,000 cashback for Full Swipe & CC EMI for all SBI cardholders.

Tell us what makes you a #Superfan, & few lucky winners get wildcard access to the sale😍

Previously Xiaomi also announced to offer guaranteed access to the limited-quantity sale of Mi 11 Ultra by purchasing an “ultra gift card” at Rs 1,999. All the above-mentioned offers will be available with the gift card, too. It should be noted that the gift card will also be available in limited quantity and will be given on a first-come, first-serve” basis.

The Xiaomi Mi 11 Ultra comes with a quad-curved 6.81-inch 2K WQHD+ E4 AMOLED display having 3,200× 1,440 pixels of resolution and 120Hz refresh rate with a 240Hz touch sampling rate and a 551ppi pixel density. There is Corning Gorilla Glass Victus protection on the screen and the display also supports HDR10+ as well as Dolby Vision. The secondary display on the back features a 1.1-inch AMOLED touch screen with 126×294 pixels of resolution. The screen is multi-functional and it also shows notifications, battery level, and weather alerts.

Mi 11 Ultra is highlighted with a triple rear camera set up, which includes a 50-megapixel Samsung GN2 primary wide-angle sensor with f/1.95 aperture and OIS support. In addition to this, there are two  48-megapixel Sony IMX586 ultra-wide-angle and tele-macro sensors (5x optical and 120x digital zoom) onboard. All three sensors support 8K video recording at 24fps. Upfront, there is a 20-megapixel sensor for taking selfies and video calling.

This flagship phone draws its power from a 5,000mAh battery with 67W wired and wireless fast charging tech along with a 10W reverse wireless charging facility.

Komila Singhhttp://www.gadgetbridge.com
Komila is one of the most spirited tech writers at Gadget Bridge. Always up for a new challenge, she is an expert at dissecting technology and getting to its core. She loves to tinker with new mobile phones, tablets and headphones.
Facebook
Twitter
WhatsApp
Linkedin
ReddIt
Email
Previous article5 July 2021 Flipkart Daily Trivia Quiz Answers: Answer to win exciting prizes
Next articleContacts not appearing in Android smartphones? Best ways to fix the problem.