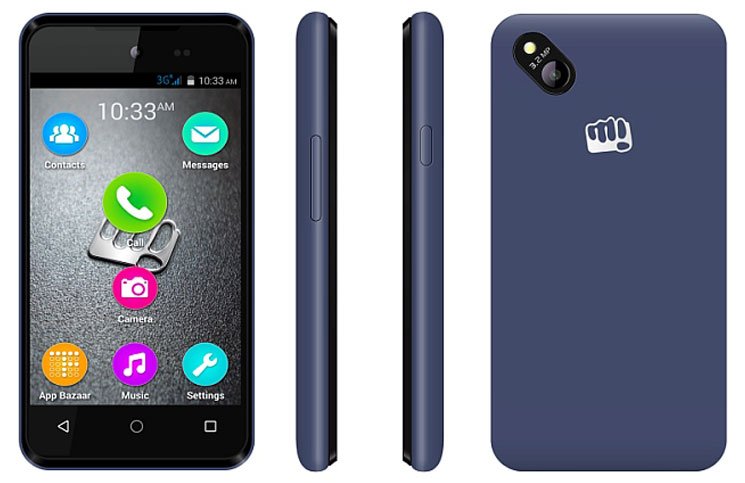 Miromax the domestic smartphone maker has yet again launched a new budget Android smartphone dubbed as ‘Bolt D303’. The company has priced the device for Rs 3,499 and it will be available in Blue colour option.

On the specifications front, the Micromax Bolt D303 features a 4inch display with 800×480 pixels resolution. The smartphone comes with dual SIM functionality and runs on Android 4.4 KitKat operating system. The device is powered by a 1.3GHz dual-core processor coupled with 512MB of RAM. The onboard storage of the smartphone accounts to 4GB which can be expanded further via microSD card. The smartphone flaunts a 3.2-megapixel rear camera with LED focus and fixed focus. On the connectivity front, the device offers 3G, WiFi, Bluetooth, GPS and houses a 1,300 mAh battery.

The Micromax Bolt D303 also offers Swipe keyboard from Firstouch, which enables the users to to communicate in their selected language. Along with this, the smartphone also comes pre-loaded with 10 regional languages including, Hindi, Gujarati, Punjabi, Malayalam, Tamil, Telugu, Kannada, Oriya, Bengali and Marathi. Along with this, the phone also offers some pre-installed apps like Firsttouch launcher, Chatz, Clean Master, hotstar, Housing, NewHunt, Quikr, Scandid, Snapdeal.

Rashi Guptahttp://www.gadgetbridge.com
Facebook
Twitter
WhatsApp
Linkedin
ReddIt
Email
Previous article
ASUS has brought another great graphics card in the form of Strix-GTX980TI to India
Next article
One Plus will be launching its next big smartphone One Plus 2 soon, some specs revealed