The phone will arrive with a 5,000mAh battery. 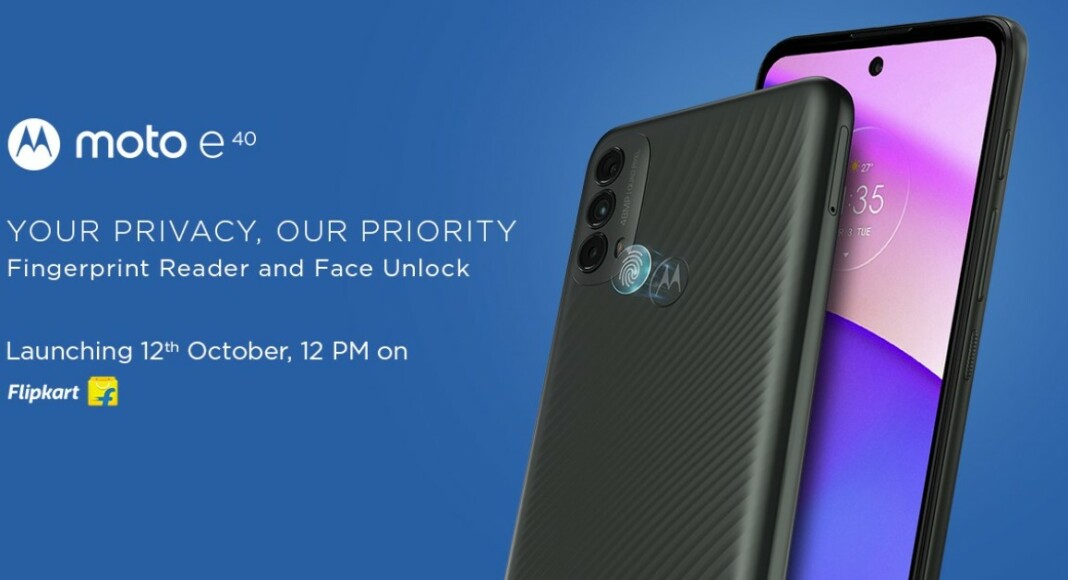 Moto E40, the latest smartphone from Motorola is all set to launch in India today. The smartphone maker is also teasing the device on Flipkart, confirming its availability on the e-commerce site. The device is said to be offered in the mid-range and budget categories. Before launching in India the smartphone has already gone official in Europe.

Prior to its launch in the country, the smartphone had already entered Europe and we are already aware of its specification as well as its expected pricing.

Moto E40 to be priced in India(expected) and sale details

Motorola has not yet revealed how much the Moto E40 will be priced in India. As it has already arrived in Europe last week the phone there is made available in a single 4GB RAM with 64GB storage option priced at EUR 149 which converts to Rs 12,900. The phone has been introduced in two colour options of Charcoal Gray and Clay Pink. Both the colour options are also teased to arrive in India as well.

Previously the device also got listed on a  Romanian e-commerce website which revealed that the phone would cost RON 779 that is roughly around Rs 13,600.

So far the specifications of the Moto E40 are concerned the phone will feature a 6.5-inch HD+ display along with 90Hz refresh rate support. The phone will be powered by a Unisoc T700 processor paired with 4GB of RAM and 64GB of storage that can be expanded using a microSD card.

In terms of optics, the upcoming phone will come with a triple rear camera set up that includes a 48 MP main sensor, 2MP macro and another 2MP sensor. For selfies, it sports an 8MP front-facing camera. In addition to this, the device will pack a 4,000mAh battery along with a 10W charger.

All these specs are similar to what Flipkart is teasing on its platform. According to the online shopping portal, Moto E40 will have a vertically aligned triple rear sensor placed inside a pill-shaped camera module. The main lens will be powered by quad Pixel tech that will offer 4x improved low light sensitivity for sharp and punchy images. The device will run on Android 11 and support a dual-SIM slot.

There will also be a dedicated Google Assistant Key. While in India Moto E40 will be backed by a 5,000mAh battery that is claimed to last for 76 hours of music playback, 14 hours of video playback and 10 hours of web browsing. Moto E40 will come with IP52 certification for water and dust resistance.

Komila Singhhttp://www.gadgetbridge.com
Komila is one of the most spirited tech writers at Gadget Bridge. Always up for a new challenge, she is an expert at dissecting technology and getting to its core. She loves to tinker with new mobile phones, tablets and headphones.
Facebook
Twitter
WhatsApp
Linkedin
ReddIt
Email
Previous articleOnePlus Buds Pro review: A very smooth operator
Next articleGoogle Pixel 6, Pixel 6 Pro price, specs and colour options tipped ahead of the October 19 launch