Moto E7 Plus release date set for September 28 in India

The device comes with a 5,000mAh battery 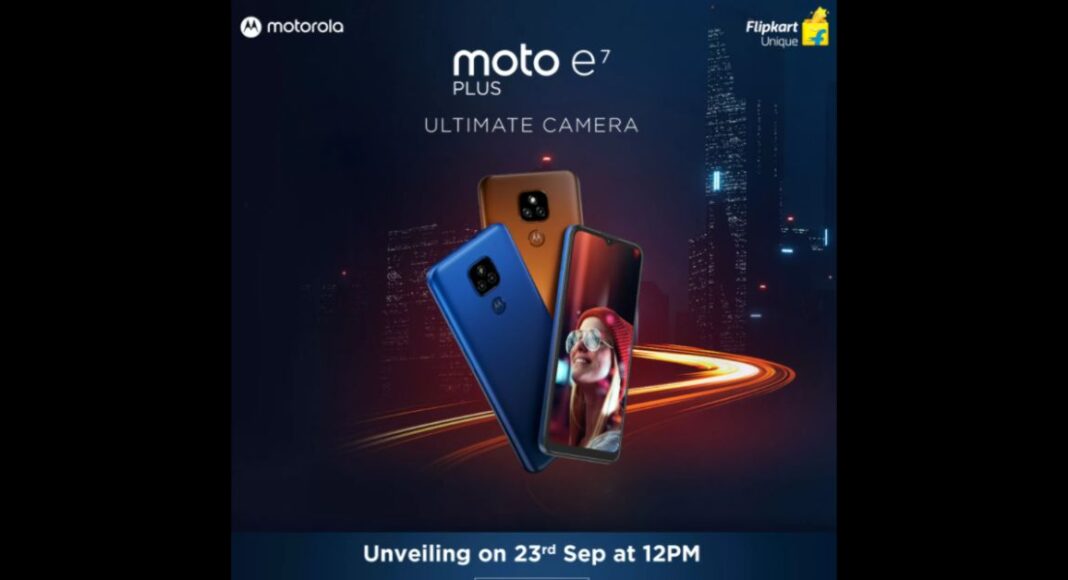 Recently, Lenovo owned Motorola unveiled its latest smartphone in the market. Moto E7 Plus has been launched in Brazil via an official listing last week and is now making its way to the Indian market. Yes, soon Motorola will launch this smartphone in the country. The device is scheduled for a September 23 launch in India. Before the official announcement and soon after the launch of the mobile phone in Brazil the company started teasing Moto E7 Plus via its social media platforms including Twitter. This comes with a water drop-style display notch display, powered by Qualcomm Snapdragon 460 SoC and houses a 5,000mAh battery. All the launch details expected pricing and specs details inside.

Moto E7 Plus is set for a release in India on September 28. The company has created a microsite for on the e-commerce website Flipkart to tease the launch details of the upcoming smartphone. As per the listing, the phone will be unveiled at 12 noon onwards and this would be available in two colour options Navy Blue and Bronze Amber. The company is yet to share the pricing of the product on the launch day but this device comes for EUR 149 that translates to Rs 13,000 in Europe for the 4GB of RAM with 64GB of storage variant.

As the device has been unveiled globally so we are very much familiar with the official specs of the device. Moto E7 Plus made is expected to make its India debut with a 6.5-inch HD+ display with a water drop-style notch. It supports a hybrid dual-SIM (Nano) slot and runs on Android 10. Powered by 1.8GHz Qualcomm Snapdragon 460 SoC E7 Plus has been paired with Adreno 610 GPU along with 4GB of RAM and 64GB of storage option which can be further expanded using a microSD card.

In terms of optics, it offers a dual rear camera set up which includes a 48-megapixel primary camera with f/1.7 aperture and a secondary 2-megapixel depth sensor with an f/2.4 aperture. While on the front there is an 8-megapixel selfie camera with f/2.2 aperture.

Moto E7 Plus houses a 5,000mAh battery with 10W charging support. The connectivity options on the phone include 4G, Bluetooth v5, Wi-Fi 802.11 b/g/n, Micro USB port, GPS, 3.5mm audio jack. Besides this, it has a rear-mounted fingerprint sensor on the back of the phone.

Komila Singhhttp://www.gadgetbridge.com
Komila is one of the most spirited tech writers at Gadget Bridge. Always up for a new challenge, she is an expert at dissecting technology and getting to its core. She loves to tinker with new mobile phones, tablets and headphones.
Facebook
Twitter
WhatsApp
Linkedin
ReddIt
Email
Previous article
Paytm app mysteriously disappeared from Google Play Store
Next article
Samsung Galaxy A71, Galaxy A51, Galaxy M01s, and more smartphone’s price slashed in India