The phone has also been teased on Flipkart’s website

Last week Lenovo owned Motorola launched two smartphones at the IFA 2019 press conference. The company launched Motorola One Zoom and Moto E6 Plus and one of them is soon to arrive in India. E-commerce website Flipkart has launched a teaser page in which it revealed that the company will be launching Moto E6S in the country. E6S seems to be the rebranded version of the Moto E6. Additionally, the company has also started sending the media invites for the September 16 event but the invites did not mention the name of the device.

The media invite does not reveal much, it only says that a new smartphone will be launched on September 16. While on the other hand, Flipkart’s teaser revealed a key highlight of Moto E6S. The product page says that the device will be offered with 4GB of RAM. But the handset that the company launched during the IFA tech event has been launched with 2GB and 4GB RAM variants so this must be the reason why the company s launching the rebranded variant of the handset.

To recollect, Motorola launched Moto E6 Plus in single Silver-Grey colour variant. It comes with a 6.1-inch HD+ (720×1560 pixels) Max Vision IPS display with a 19.5:9 aspect ratio. The smartphone is powered by octa-core Helio P22 SoC and is offered in 2Gb and 4GB RAM option along with 32 GB and 64 GB internal storage. The internal storage can be expanded up to 512GB via microSD card. The device runs on Android 9.0 Pie and is backed up by a 3000mAh battery. 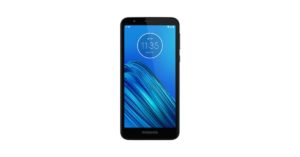 The camera includes a dual rear camera combined with a 13-megapixel primary sensor with f/2.0 aperture and a 2-megapixel depth sensor. For selfies and video calling it has an 8-megapixel f/2.0 selfie.

For connectivity, it comes with G VoLTE, Wi-Fi 802.11 b/g/n, Bluetooth v4.2, GPS/ A-GPS, FM radio, Micro-USB, and a 3.5mm headphone jack.  Sensors on the Moto E6 Plus include accelerometer, ambient light sensor, and a proximity sensor.

While many of the aforementioned specifications match with the Flipkart’s teaser. The Moto E6 Plus is expected to arrive with all the mentioned specs but with a slight change in the RAM variants.

Komila Singhhttp://www.gadgetbridge.com
Komila is one of the most spirited tech writers at Gadget Bridge. Always up for a new challenge, she is an expert at dissecting technology and getting to its core. She loves to tinker with new mobile phones, tablets and headphones.
Facebook
Twitter
WhatsApp
Linkedin
ReddIt
Email
Previous article
Google might launch its next-generation smartphone pixel 4 on October 15
Next article
Mi Band 4 to launch in India on September 17, to be sold via Amazon