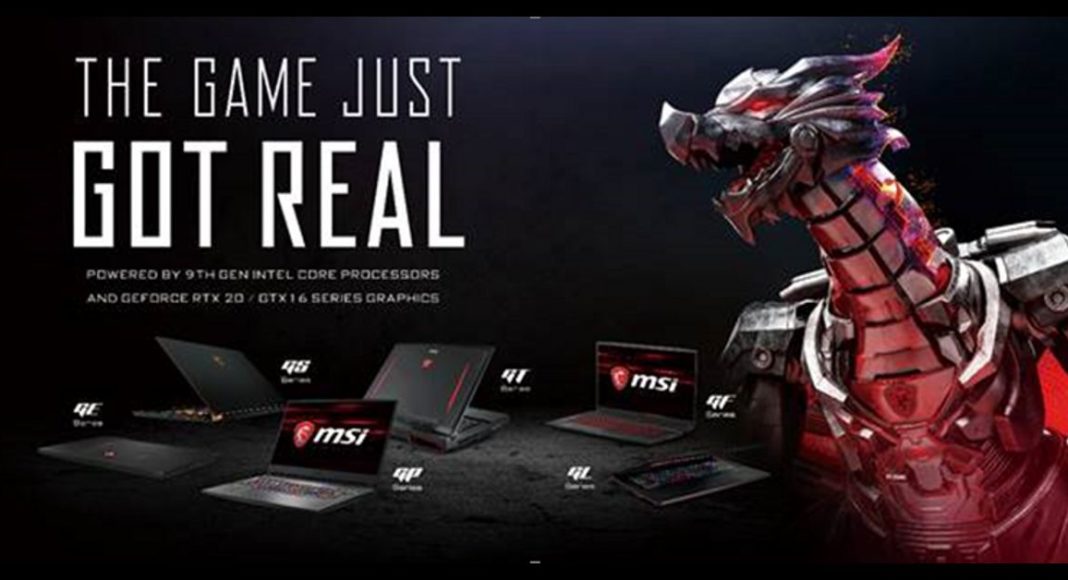 Speaking on the launch, Chang-Ching Lin, Regional Marketing Manager said, “We are excited to announce that MSI is the first brand to debut the 9th Gen. Intel® Core™ i9 Processors in the gaming series. Furthermore, the GTX 16 series graphics cards will provide a more affordable graphics solution for gamers while still attaining a high level of performance. With these new additions to our product portfolio, we not only aim at offering gamers the best experience but also want to make gaming more inclusive. India is a key focus market for MSI and we will continue to bring in our latest line of products in the country in line with the global launches.”

The newly launched MSI laptops are a part of a fully upgradable gaming line-up which includes the MSI GT-series, MSI GS-series, MSI GE-series, MSI GP-series, MSI GL-series and MSI GF-series. The new laptops come powered by the 9th Generation Intel Core CPUs which are 45% faster than the previous models. But the new laptops are not only good for gaming as they can handle heavy audio composition, video editing and multitasking with ease. They also equip the NVIDIA GTX-16 series GPUs which offer 50% more performance increase.

The MSI GS Stealth, on the other hand, comes in multiple variants, from NVIDIA RTX 2080 with the Max-Q design to the NVIDIA GTX-16 series. The MSI GS65 comes with a 240Hz display panel to maximize the gaming experience without frame drops.

The MSI GE-series is known for its aesthetics and design and in the updated version, the GE-series is getting a 17.3-inch and a 15.6-inch display with 144Hz refresh rate. It is powered by the Intel 9th Gen Core i7 CPUs paired with NVIDIA GPUs. Also, the MSI GE75 is the first model from MSI with Wi-Fi 6 capability which gives it a faster network and speed.

Moreover, the MSI GP-series comes with a brand-new cosmological warship style design and misty grey color. The MSI GP75 comes with Leopard sports a per-key RGB keyboard by SteelSeries. It too has gotten a new Intel 9th Generation CPU paired with the updated NVIDIA GPU.

Furthermore, the MSI GL-series has multiple variants with RTX series NVIDIA GPU to GTX-16 series GPU. According to the company, the GL-series gaming laptops is good and mainstream for the gamers and it can handle most of the AAA title games with ease. It also has the RGB backlit keyboard like many other MSI laptops.

Finally, the MSI GF-series is known for its unique built and light weight. Even though it is light in weight it offers the latest Intel 9th Gen CPU and NVIDIA updated GPU. According to the company, the MSI GF75 and the MSI GF63 is lighter and more powerful than its predecessor.

Aman Singhhttps://www.gadgetbridge.com/
Aman Kumar Singh has a Masters in Journalism and Mass Communication. He is a journalist, a photographer, a writer, a gamer, a movie addict and has a love for reading (everything). It’s his love of reading that has brought him knowledge in various fields including technology and gadgets. Talking about which, he loves to tweak and play with gadgets, new and old. And when he finds time, if he finds time, he can be seen playing video games or taking a new gadget for a test run.
Facebook
Twitter
WhatsApp
Linkedin
ReddIt
Email
Previous articleNokia 9 PureView in-display fingerprint scanner has this serious bug
Next articleRedmi Y3 vs Redmi Note 7: Comparison