Netgear Armor is available for a free 30-day trial period. 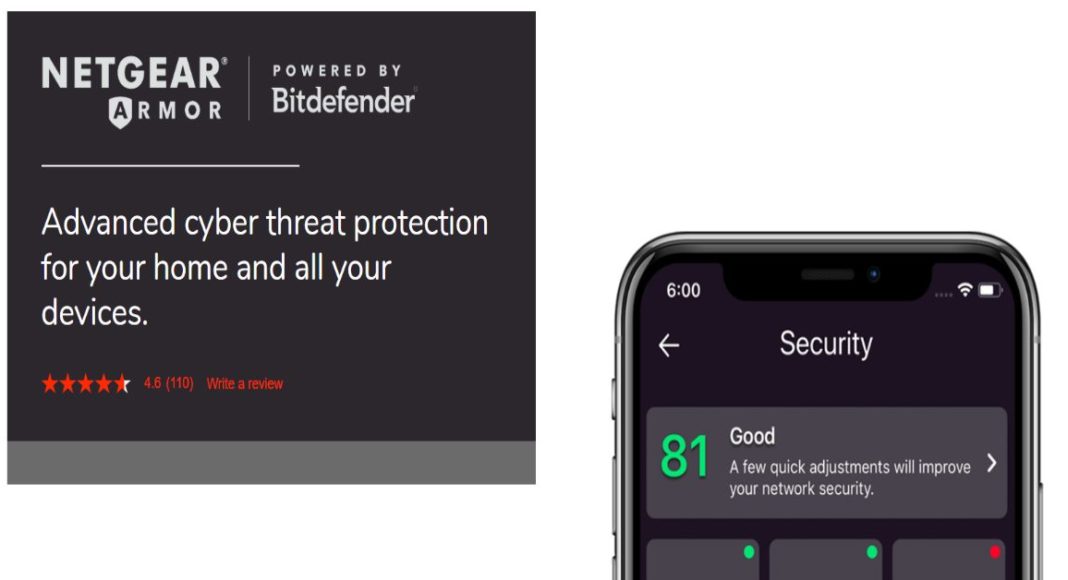 Netgear today introduced Armour Protection for its latest Wi-Fi 6 routers along with mesh systems to cover larger areas. The company has today announced the availability of advanced cyber protection, Netgear Armor powered by Bitdefender on Orbi Wi-Fi 6 Mesh Systems and a number of Netgear Wi-Fi 6 routers.

The company says its Armor cybersecurity protects the connected networks against threats, including trojans, ransomware, zero-day exploits, rootkits, and spyware, helps block fraudulent websites trying to steal financial data such as passwords or credit card numbers and looks out for malicious links in browsers, emails, or apps.

Netgear Armor comes with Active Vulnerability Scans for all the connected devices in your home. When threats are detected it automatically alerts you and the identified danger is blocked through Netgear Orbi/Nighthawk app. It also has web protection which helps to keep your browser safe by alerting you and blocking potentially harmful webpages and anti-theft protection if your devices are lost or stolen for Android and Windows devices. The Bitdefender VPN is the latest feature that comes with Bitdefender Security for secure browsing and to encrypt the internet connection to keep online activity private and worry-free while connected to public Wi-Fi networks. According to the company, the existing customers can update to the latest version of the Bitdefender app to access the VPN feature for free for up to 200MB of encrypted data traffic per day per device.

Netgear Armor is available for a free 30-day trial period. After the trial period, a yearly subscription starting at $69.99 USD is necessary that translates to Rs 5,329 as per Indian currency. Whereas the existing customers can upgrade their VPN from the free 200MB of encrypted data traffic per day per device to unlimited encrypted data traffic for an additional yearly subscription of $39.99 that translates to Rs 3,045.

By the third quarter of 2020, Netgear Armor is expected to be available on Nighthawk Wi-Fi 6 Mesh Systems (MK62/63), which will be provided via an automated firmware update. While the existing customers can use their app to update the firmware to the latest version and activate Netgear Armor by clicking on the ‘Security’ tile.

Komila Singhhttp://www.gadgetbridge.com
Komila is one of the most spirited tech writers at Gadget Bridge. Always up for a new challenge, she is an expert at dissecting technology and getting to its core. She loves to tinker with new mobile phones, tablets and headphones.
Facebook
Twitter
WhatsApp
Linkedin
ReddIt
Email
Previous article
Apple MacBook Pro and MacBook Air users report USB connectivity issues
Next article
Samsung Galaxy Note 10 Lite price revised in India, now available with a massive discount of Rs 4,000