Nothing Ear 1 TWS earbuds listed on Flipkart, price revealed prior to the launch

The TWS earphones are confirmed to come with a price tag of Rs 5,999 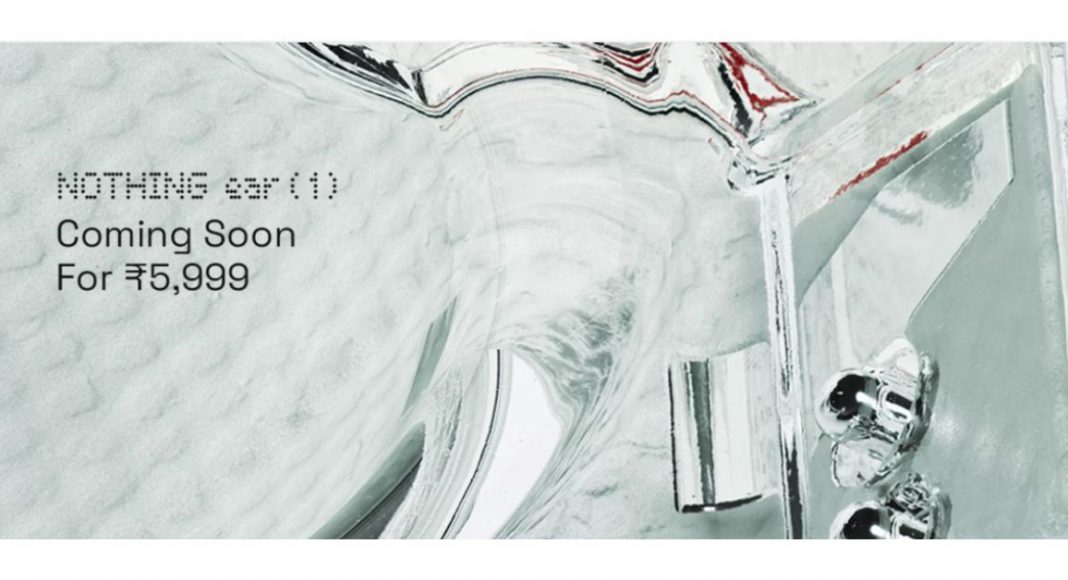 Recently tech firm Nothing founder Carl Pei hinted at the pricing of its very first product, Ear 1 TWS earbuds, which will be launching on July 27. As per the company’s head, the TWS earphones will be offered at a global price tag of GBP 99 that translates to Rs 10,200. Now the device has been listed on Flipkart, therefore, revealing the Indian pricing of the audio device.

Yes, ahead of the official launch of the Nothing Ear 1 TWS earbuds the company has listed the TWS earphone on the home-grown e-commerce website Flipkart to tease its availability in the country. As per the dedicated microsite, the Nothing TWS earphone will be made available in India with a price tag of Rs 5,999. The landing page doesn’t confirm the launch date for India nor does it reveal the design concept of the device but the pricing only.

It should be noted that in an interview the company CEO Carl Pei revealed that the upcoming Ear 1 true wireless stereo (TWS) earbuds will be offered at a global price tag of GBP 99 that translates to Rs 10,200 which is considerably higher than the recently revealed Indian pricing. That could be the company’s tactics to give a tough fight to other accessible brands like Samsung Galaxy Buds Live, Google Pixel Buds A-Series, OnePlus Buds, and AirPods that are considered to be popular for offering high ends TWS earphones. However there are other brands available in India which are offering the product at much lower rates but the company is aiming at the consumers who are inclined towards brands such as Sony, Samsung, OnePlus, Apple and Google.

Considering the design as well, Nothing Ear 1 earbuds will also offer a more costly design to realize than a standard, non-transparent design. So the device will feature a unique transparent casing in order to ensure that the inside looks just as good as the outside. In addition to ANC three “high definition”. As revealed by the CEO,  “ It could be getting the right magnets — as magnets are usually designed to go inside of a product and not be seen by the consumer — to figuring out the best type of glueing. You never have to solve that problem if you have a non-transparent product, but what kind of glue will keep the industrial design intact?”

It should be noted that the Noting earbuds are designed in association with Stockholm-based Teenage Engineering. Recently the company also appointed Samsung’s executive Manu Sharma who recently announced the collaboration of Nothing with Flipkart. He took to Twitter to announce the association to make its TWS earbuds available for purchase in India. Initially, the UK based tech firm Nothing is eyeing on U.K., India, Europe and North America, followed by Japan, Korea and other countries

The Nothing Ear 1 TWS earbuds are scheduled to launch on July 27. The launch event is going to kickstart at 2 PM BST and 6:30 PM IST.

Komila Singhhttp://www.gadgetbridge.com
Komila is one of the most spirited tech writers at Gadget Bridge. Always up for a new challenge, she is an expert at dissecting technology and getting to its core. She loves to tinker with new mobile phones, tablets and headphones.
Facebook
Twitter
WhatsApp
Linkedin
ReddIt
Email
Previous article
13 July 2021 Flipkart Daily Trivia Quiz: Answer to win exciting prizes
Next article
Xiaomi Mi 11 Ultra to go on open sale in India tomorrow