NVIDIA Quadro RTX 5000 GPU is finally coming to the laptops, will be launched in June

The Quadro RTX 5000 GPU packing laptops will be branded under the “RTX Studio”. 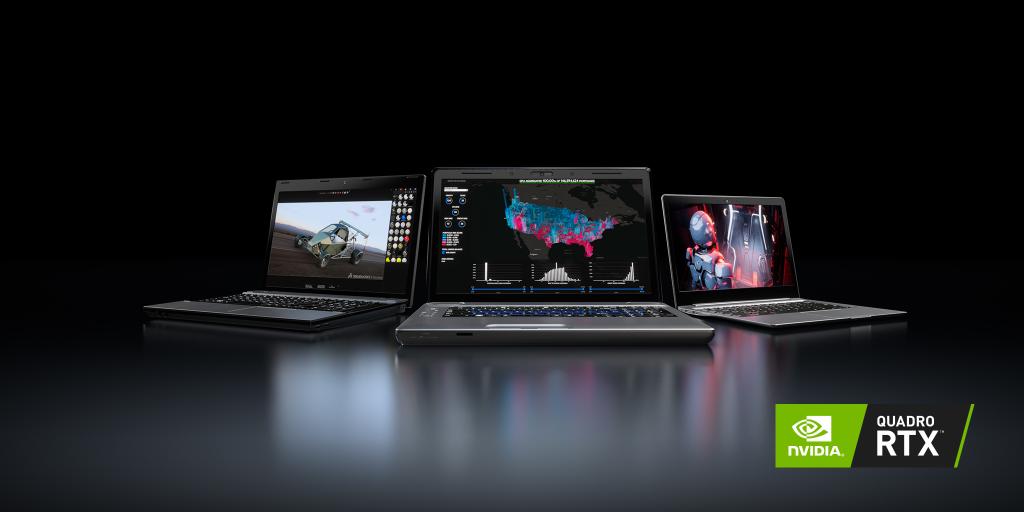 The NVIDIA Quadro RTX 5000 GPU will come with the Ray Tracing technology and it is more powerful and efficient than its predecessors. Currently, there are 17 new laptops of 7 partner companies which are scheduled to have the Quadro RTX 5000 GPU inside them. The new laptops will come with the “RTX Studio” branding on them and according to NVIDIA’s Jason Paul, the new GPUs will offer “desktop class performance on the go”.

According to NVIDIA, the Quadro RTX 5000 GPU powered laptops are capable of running 7x faster than the MacBook Pro with 32GB RAM and AMD’s Pro Vega 20 GPU. The laptops with the RTC Studio branding will come with the “NVIDIA Studio Stack” which is a software suite of SDKs and APIs which are designed for a faster video editing, rendering, vector animation, etc. The company also said that the RTX Studio branding are tested extensively with software from Adobe, Autodesk, Avid, Blackmagic and Maxon. Other than the video software, game developers who used Unity or Unreal will also get a desktop like performance out of these machines. They also promised that the new laptops will give “the best performance and reliability.”

Say hello to the latest #NVIDIAStudio Driver, hot off the press and ready to supercharge your favorite creative apps. ⚡️

NVIDIA Studio Drivers include the highest level of support and performance for all the top creative applications.

All the new RTX Studio branded laptops will be made available from June onwards. And the companies which will bring the new Quadro RTX-series GPUs in their machines are – ASUS, Dell, HP, MSI, Razer, Gigabyte and Acer. Depending on the branding and the specification of the laptops their prices might differ but the base price will be $1,600 (approximately Rs 1,11,456).

Aman Singhhttps://www.gadgetbridge.com/
Aman Kumar Singh has a Masters in Journalism and Mass Communication. He is a journalist, a photographer, a writer, a gamer, a movie addict and has a love for reading (everything). It’s his love of reading that has brought him knowledge in various fields including technology and gadgets. Talking about which, he loves to tweak and play with gadgets, new and old. And when he finds time, if he finds time, he can be seen playing video games or taking a new gadget for a test run.
Facebook
Twitter
WhatsApp
Linkedin
ReddIt
Email
Previous article
ARM Cortex-A77 CPU, ML CPU and Mali-G77 GPU launched at the Computex 2019
Next article
Best-looking gadgets that have been launched in Q1 2019