The upcoming smartphone will be available via Amazon as soon as it arrives in India. 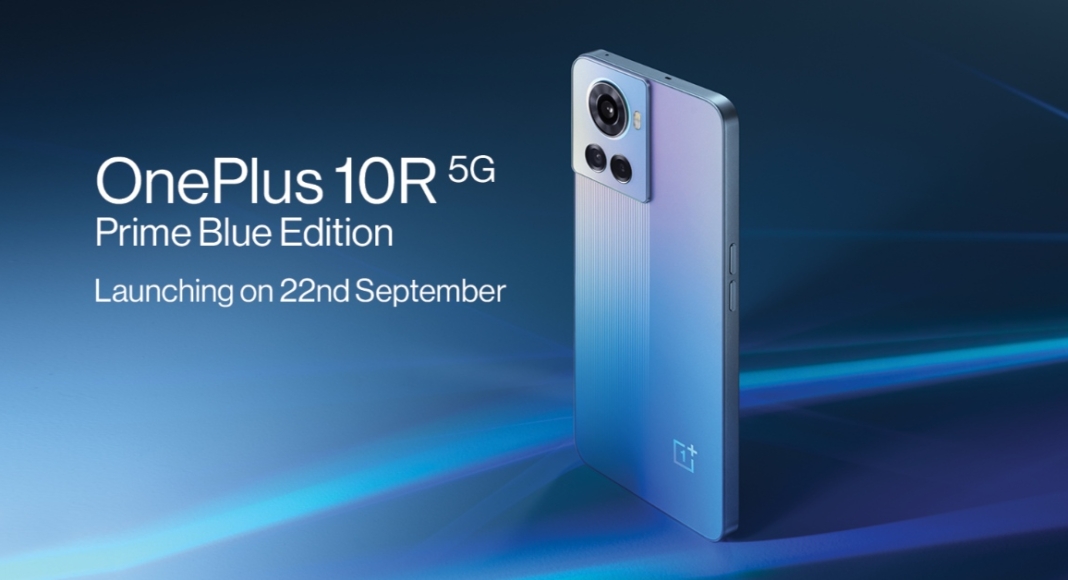 OnePlus has officially confirmed the launch date for the OnePlus 10R 5G Prime Blue Edition in India. The upcoming smartphone is scheduled to debut on September 22. This will be the third colour option for the smartphone that was teased by the first last week. Notably, there are two versions of the OnePlus 10R 5G smartphone. The basic version has 80W SuperVOOC charging, while the Endurance Edition has 150W SuperVOOC fast charging.

The launch of the Prime Blue Edition also honours OnePlus’ longstanding partnership with Amazon and the crucial role that partnership has played in the growth of the company. As an added treat, customers who purchase the new OnePlus 10R Prime Blue on Amazon will also get a free 3-month membership to Amazon Prime. The device is currently listed on Amazon and the price is likely to be revealed on the day of the official launch which is September 22. The 150W model only comes in a single Sierra Black, the 80W variant is already offered in Forest Green and Sierra Black.

The OnePlus 10R Prime Blue Edition, according to the manufacturer, will have a cutting-edge 3D Passive Cooling System. The phone will also have a 6.7-inch Fluid AMOLED display with a 120 Hz refresh rate, a sophisticated 3D Passive Cooling System, and other features that allow it to run even the most graphically demanding games seamlessly while preserving frame rates and power usage.

The OnePlus 10R Prime Blue Edition’s rear triple camera system, which the company claims consists of a 50 MP Sony IMX766 primary camera, an 8 MP ultra-wide camera with a 119° field of view, a 2 MP macro camera, and electronic image stabilisation (OIS), completes the flagship experience by enabling users to capture the spirit of the holiday season with beautiful photography.

The 6.7-inch full-HD+ AMOLED display on the OnePlus 10R 5G stands out thanks to its 1,080 x 2,412 pixels of resolution. It offers a touch response rate of up to 720Hz and a dynamic refresh rate of 120Hz. The screen has a 20:9 aspect ratio and is covered in 2.5D curved Corning Gorilla Glass 5. The new smartphone has an octa-core MediaTek Dimensity 8100-Max SoC, up to 12GB of LPDDR5 RAM, and up to 256GB of UFS 3.1 storage. It runs OxygenOS 12.1, which is based on Android 12. The chipset has 3D Passive Cooling Technology, which controls temperature using a 4,100mm square vapour chamber.

Komila Singhhttp://www.gadgetbridge.com
Komila is one of the most spirited tech writers at Gadget Bridge. Always up for a new challenge, she is an expert at dissecting technology and getting to its core. She loves to tinker with new mobile phones, tablets and headphones.
Facebook
Twitter
WhatsApp
Linkedin
ReddIt
Email
Previous articleRedmi 11 Prime 5G Review: 5G Connectivity At An Affordable Price
Next articleSamsung BESPOKE 4-Door Flex French Door Refrigerator with Customizable Colour Combinations launched in India