OnePlus is set to bring another new addition to the recently launched T series. This time the company has introduced only a single model OnePlus 8T whereas every time the company usually also launched the Pro variant but that is to come later on. But then again, the company OnePlus 8T Cyberpunk 2077 Limited Edition is teased to launch on November 2. The limited-edition phone was being teased by the company since the launch of 8T. The upcoming smartphone will have yellow and grey tones that match with the company’s most anticipated upcoming game Cyberpunk 2077.

OnePlus took to the Chinese micro-blogging website Weibo to announce that OnePlus 8T Cyberpunk 2077 Edition is scheduled to launch on November 2 in China. The launch event will kick off at 11.30 am IST. As per the released poster yellow accents on a grey back panel is seen which goes in line with the company’s upcoming game Cyberpunk 2077. 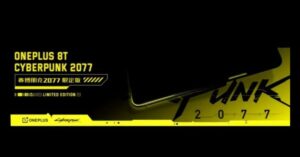 Until now not much information has been revealed by the company about the smartphone. But the device is confirmed to be available for pre-order from November 4 in China. The Indian availability of the smartphone is still unclear but leaks suggest that the OnePlus 8T Cyberpunk 2077 Limited Edition will be available in a configuration of 12GB RAM and 256GB storage priced at CNY 3,999 that translates to Rs 43,600.

The OnePlus 8T Cyberpunk 2077 Limited Edition will only see changes in the form factor while the specifications are expected to remain the same as the standard model. The device will go with the 6.55-inch flat fluid AMOLED display with 1,080×2,400 pixels of resolution, 91.1 percent screen-to-body ratio and 120hz refresh rate with HDR10+ support. The phone will run Android 11-based OxygenOS 11. The OnePlus 8T Cyberpunk 2077 Limited Edition will be powered by Qualcomm Snapdragon 865 SoC. For optics, there will be a quad rear camera set up onboard with a 48-megapixel primary sensor with optical image stabilisation (OIS), a secondary 16-megapixel ultra-wide-angle sensor with a 123-degree field of view, a 5-megapixel macro lens and a 2-megapixel monochrome sensor. While on the front it has a 16-megapixel selfie camera.

The phone will pack a 4,500mAh battery and supports Warp Charge 65. For connectivity it might include 5G, 4G, dual-band Wi-Fi, Bluetooth 5.1, GPS, NFC, Glonass, and a USB Type-C port.

Komila Singhhttp://www.gadgetbridge.com
Komila is a one of the most spirited tech writers at Gadget Bridge. Always up for a new challenge, she is an expert at dissecting technology and getting to its core. She loves to tinker with new mobile phones, tablets and headphones.
Facebook
Twitter
WhatsApp
Linkedin
ReddIt
Email
Previous articleSamsung launches SmartThings Find app to help you locate lost Galaxy devices
Next articleVivo to discontinue Funtouch OS, to be replaced with Origin OS: Report

Recently, Samsung Galaxy A32 appeared on the company’s website in India. The support page or the phone went live in the county suggesting an...
Read more
Laptops

The Taiwanese electronics major, Acer, has expanded its gaming portfolio with the launch of Aspire 7 Gaming Laptop in India. The is an upgraded...
Read more
Gadget Bridge Ace

Minecraft Dungeons ‘Flames of the Nether’ pack is out: Everything you need to know

Minecraft is one of the most popular games from Mojang Studios that takes place in the expanding Minecraft universe. In place of an open...
Read more

Komila Singh - Feb 26, 2021 0
Recently, Samsung Galaxy A32 appeared on the company’s website in India. The support page or the phone went live in the county suggesting an...

Xiaomi expanding its manufacturing in India for smartphones and smart TVs,...

PUBG: New State announced for Android and iOS: Everything you need to know and...

Minecraft Dungeons ‘Flames of the Nether’ pack is out: Everything you...

FAU-G: When is the multiplayer mode coming and what’s new

Sony announced  its VR headset for PS5: Everything you need to...

Anurag Sharma - Feb 25, 2021 0
Sony recently announced the Virtual reality (VR) headset for the PlayStation 5 that will arrive with an enhanced field of view and a new...