Both the devices are already available in China. 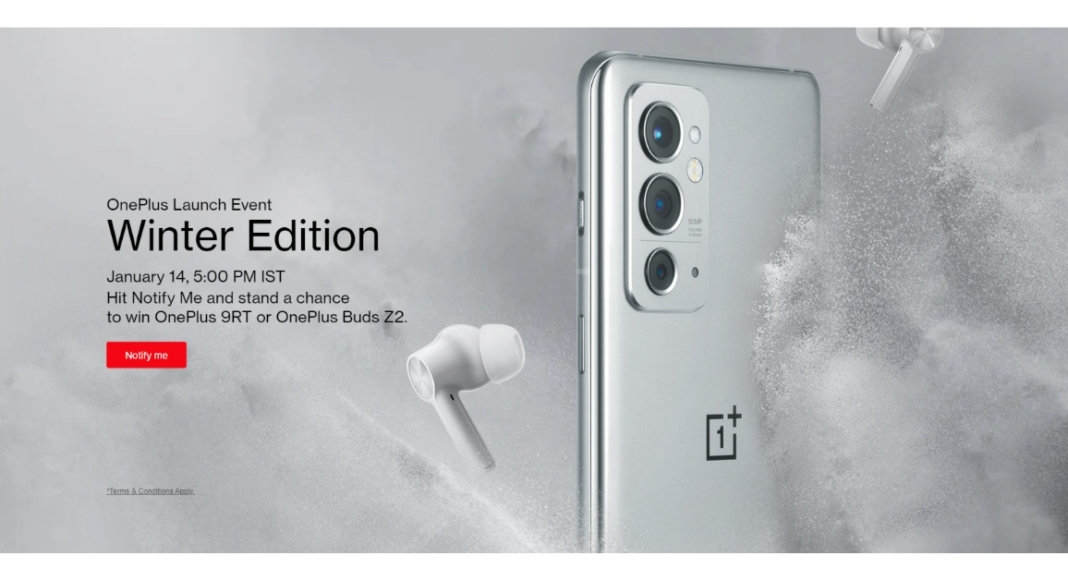 The India launch date for the OnePlus 9RT and OnePlus Buds Z2 true wireless stereo (TWS) earbuds have been announced. Both the devices are set to launch on January 14 in the country. Both the products have already launched in China last year. The smartphone is powered by the Snapdragon 888 SoC. It features a triple rear camera set-up and a 120Hz display. Whereas, OnePlus Buds Z2 11MM dynamic drivers and active noise cancellation (ANC)

The announcement comes only hours after OnePlus hinted at the release of both devices in two different tweets. On January 14 at 5 p.m. IST, the OnePlus 9RT and OnePlus Buds Z2 will be unveiled during a virtual Winter Edition launch event. The event will be broadcast live on the OnePlus India YouTube channel. On its official website, the firm has also set up a ‘Notify Me’ page.

A 6.62-inch Samsung E4 AMOLED display with full HD+ quality will most likely be seen on the OnePlus 9RT. The display will feature a 1,0802,400-pixel resolution and a refresh rate of up to 120Hz. ColorOS, which is based on Android 11, will come pre-installed. There will be an octa-core Qualcomm Snapdragon 888 SoC, as well as up to 12GB of LPDDR5 RAM and up to 256GB of UFS 3.1 storage.

The OnePlus 9RT will also include a 4,500mAh battery with 65W Warp Charge capability. Aside from that, the smartphone comes with 5G and 4G LTE connectivity, as well as Bluetooth v5.2, WiFi 6, GPS/A-GPS, NFC, and a Type C port.

The OnePlus Buds Z2 has already gone on sale throughout the world. The earbuds have an IPS55 rating, and the protective case has an IPX4 rating.

Because the device is touch-enabled, you may utilise it by tapping or touching it. The TWS earphones have a Bluetooth v5.2 connection with a latency of 94 milliseconds.

The OnePlus Bus Z2 is powered by 11mm dynamic drivers. Active noise cancellation is also included in the device, which claims to reduce ambient noise by up to 40 decibels. Dolby Atmos is available for a more immersive music experience. Three microphones are included in the TWS earphones for improved audio quality.

The charging case includes a 520mAh battery, while each earbud has a 40mAh battery.

Komila Singhhttp://www.gadgetbridge.com
Komila is one of the most spirited tech writers at Gadget Bridge. Always up for a new challenge, she is an expert at dissecting technology and getting to its core. She loves to tinker with new mobile phones, tablets and headphones.
Facebook
Twitter
WhatsApp
Linkedin
ReddIt
Email
Previous articleHow to sign out of Prime video on your smart TV?
Next articleLAUNCHED: Samsung Galaxy S21 FE 5G has a 120Hz AMOLED display and triple rear cameras