The device is said to come in two colour options of Blue Void and Charcoal Ink.

Recently the design and the Indian pricing of the OnePlus Nord CE 5G was tipped ahead of the official launch. Besides this more renders of the handset have been leaked showcasing the design as well as the colour options that it would come in. The company has been teasing the key details of the upcoming phone which is scheduled to launch in the country on June 10.

An Indian tipster in collaboration with Pricebaba has shared some more renders of the alleged OnePlus Nord CE 5G. According to the leaked renders, the OnePlus Nord CE 5G would arrive in India in two colour options of Blue Void and Charcoal Ink. The Charcoal Ink has already been leaked by an Amazon listing whereas the Blue Void was also leaked through the company. 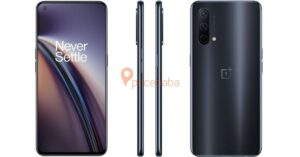 The front and the back as well as the side panels can be clearly seen in the renders. The volume rocker is given on the left whereas the power button is given on either side of the frame. There is also a triple rear camera set up on its back while the front has a hole-punch cutout that play to the selfie camera.

In his previous tweet, he also tipped the price of the OnePlus Nord CE 5G. The upcoming handset will arrive in India with a starting price of Rs 22,999. It has further revealed that the additional launch offers include Rs 1,000 off to the HDFC Bank customers.

The company has already teased in its previous teasers that the OnePlus Nord smartphone will bring a hole-punch design display along with a 64-megapixel primary sensor at the back. Teasers also revealed that the phone would be 7.9mm thick and come with a 3.5mm headphone jack, USB Type-C port as well as a microphone.

Separately, according to a report by PCMag, in its email interview with OnePlus CEO Pete Lau has shared some of the key details as well as an image of the  OnePlus Nord N200 5G that showcases a triple rear camera setup on its back. While the front panel has a hole-punch cutout design to house a selfie camera. On the side of the frame a  side-mounted fingerprint that will also double up as a power button.

Speaking of the specifications, the company’s head also shared that the OnePlus Nord N200 5G is going to be highlighted with a 6.49-inch 1080p LCD display. Moreover, the display is expected to have support for a 90Hz refresh rate.

Komila Singhhttp://www.gadgetbridge.com
Komila is one of the most spirited tech writers at Gadget Bridge. Always up for a new challenge, she is an expert at dissecting technology and getting to its core. She loves to tinker with new mobile phones, tablets and headphones.
Facebook
Twitter
WhatsApp
Linkedin
ReddIt
Email
Previous articleJune 9 Flipkart Daily Trivia Quiz Answers: Answer to win exciting prizes
Next articleVivo Y73 confirmed to launch in India on June 10, teaser released