Oppo A74 5G smartphone to launch in India on April 20, to be available via Amazon

The smartphone is the company’s first A series phone with 5G capabilities. 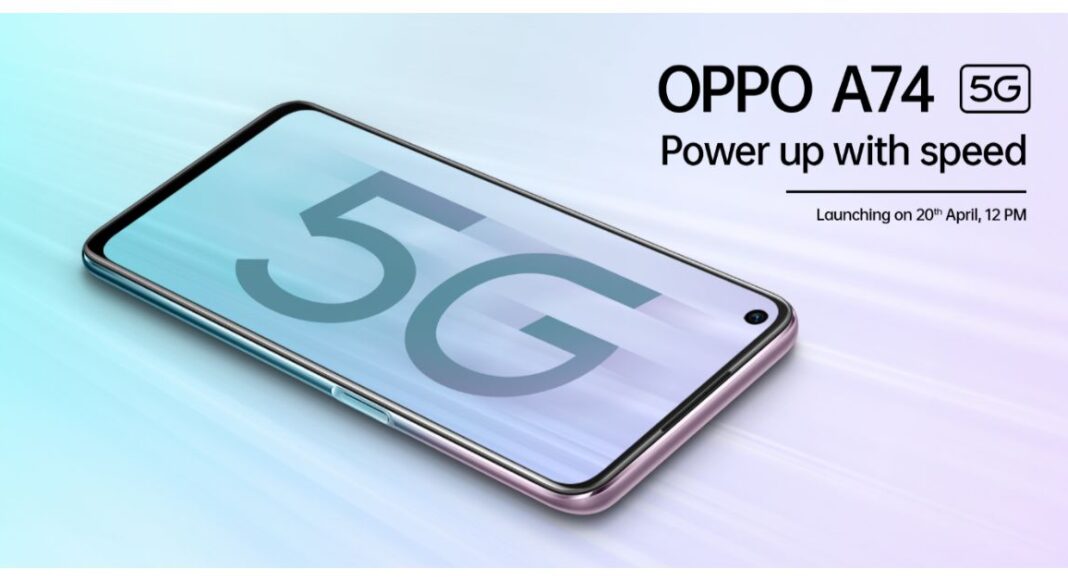 The Chinese smartphone company Oppo today announced the launch of its new smartphone in India. The company has confirmed to launch Oppo A74 5G in India via Amazon. To recall, the smartphone has already made its way into the Cambodian and Thailand market, however, the specification of the Indian variant is supposed to differ from what is being offered in the other two regions.

Oppo A74 5G is all set to launch in India on April 20. The company has also listed the device on Amazon.com to tease its availability. According to the company, the phone will make its debut on the e-commerce websites at 12 noon on April 20. It should be noted that the smartphone is the company’s first 5G ready mobile phone to be priced under Rs 20,000. Also (as said), this handset is going to be Oppo’s first A series phone with 5G capabilities.

The company stated, “In line with the distinguished OPPO A series legacy of offering all superior features at a competitive price point, OPPO, the leading global smart device brand, is all set to introduce the all-new OPPO A74 5G, its first 5G ready phone under INR 20,000. The brand has been consistently working to bring in customer-centric meaningful innovations and advanced technologies across its portfolio and this new A-series smartphone bears testimony towards OPPO’s continuous endeavour in democratising cutting-edge technology for one and all. This is OPPO’s first phone with 5G compatibility in the pocket-friendly segment.”

Oppo chooses to not say much about its smartphone, but it mentions that the phone will feature a 90Hz Hyper-color Screen offering vibrant and clear photos and videos, whether of portraits, landscapes, food or even night shots with higher colour saturation and accuracy than the previous generation of A Series. The Hyper-color will enable you to perceive a wider spectrum of colours that are more realistic and accurate.

According to industry insiders, the upcoming device will feature a 6.5-inch full-HD+  LCD display offering 1,080×2,400 pixels of resolution and a 90Hz refresh rate support. In addition to this, Oppo A74 5G is tipped to be powered by Qualcomm Snapdragon 480 SoC with 6GB of RAM and 128GB of storage.

In terms of cameras, the phone will be armed with a triple rear camera setup that includes a 48-megapixel primary sensor in addition to two 2-megapixel lenses. Upfront, it is said to feature a 16-megapixel selfie sensor. Apart from this, the mobile phone is likely to be backed by a 5,000mAh battery with 18W fast charging support.

Komila Singhhttp://www.gadgetbridge.com
Komila is one of the most spirited tech writers at Gadget Bridge. Always up for a new challenge, she is an expert at dissecting technology and getting to its core. She loves to tinker with new mobile phones, tablets and headphones.
Facebook
Twitter
WhatsApp
Linkedin
ReddIt
Email
Previous article
Samsung Galaxy M42 5G confirmed to launch in India on April 28, gets listed on Amazon.com
Next article
Google Assistant’s new feature will enable the user to find a lost Apple device