Oppo Reno and Oppo Reno 10x Zoom Edition to launch in India today: How to watch the live stream

The launch event of Oppo Reno and Oppo Reno 10x Zoom Edition will be livestream on the company’s YouTube channel. 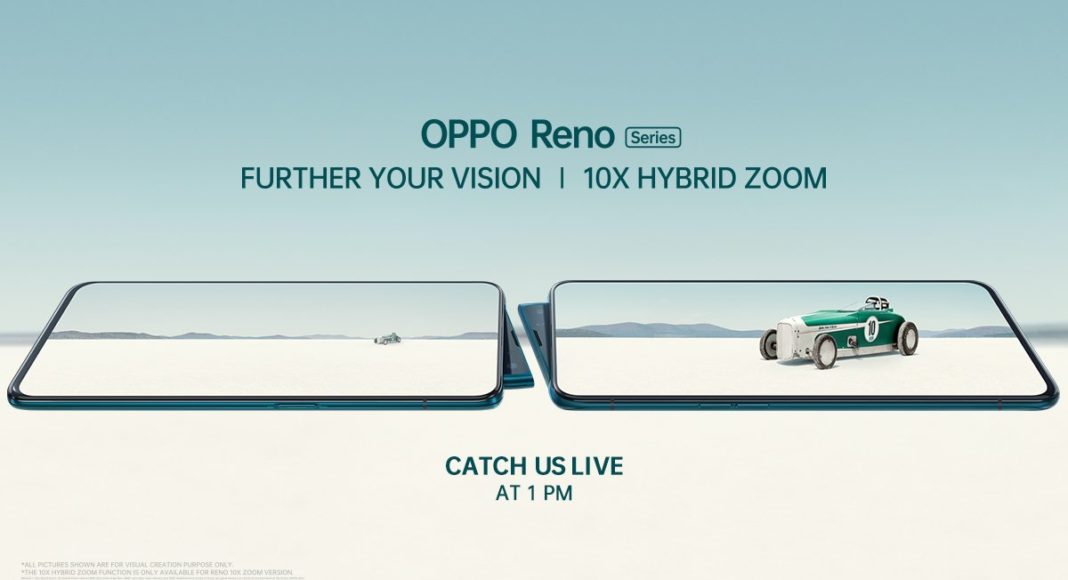 Oppo is finally bringing its Oppo Reno series of smartphones in India and they will be launched at an event in New Delhi today. The company will be launching two smartphones – the Oppo Reno vanilla version and the Oppo Reno 10x Zoom Edition. Both the smartphones were launched in China earlier this year and had made headlines with its new and unique shark fin selfie camera. The event will start from 12pm (IST) onwards. Interested users can also watch the live stream of the event on the official Oppo Reno India YouTube channel.

Although the company hasn’t said anything about the smartphones’ official pricing in India, we are expecting them to be similar to their costs in China.

The vanilla variant of Oppo Reno sports a 6.4-inch Full-HD+ AMOLED display with Gorilla Glass 6 protection on top. Since it is not a flagship model, it is powered by the Snapdragon 710 SoC, paired with up to 8GB of RAM and 256GB of storage. The smartphone runs Android 9 Pie skinned with ColorOS and packs a 3,765mAh battery with VOOC 3.0 fast charge support.

On the camera department, the Oppo Reno features a dual-rear camera setup which comprises of a 48MP Sony IMX586 sensor paired with a 5MP depth sensor with an f/2.4 aperture. On the front, there is the side-swing/ shark-fin 16MP selfie camera with an f/2.0 aperture.

On the camera front, the Oppo Reno 10x Zoom Edition features a triple-rear camera setup which comprises of a 48MP Sony IMX586 sensor with an f/1.7 aperture. The second camera is a 13MP periscope telephoto lens paired with an 8MP super wide-angle lens. On the front, there is the same shark-fin/side-swing 16MP selfie camera.

Aman Singhhttps://www.gadgetbridge.com/
Aman Kumar Singh has a Masters in Journalism and Mass Communication. He is a journalist, a photographer, a writer, a gamer, a movie addict and has a love for reading (everything). It’s his love of reading that has brought him knowledge in various fields including technology and gadgets. Talking about which, he loves to tweak and play with gadgets, new and old. And when he finds time, if he finds time, he can be seen playing video games or taking a new gadget for a test run.
Facebook
Twitter
WhatsApp
Linkedin
ReddIt
Email
Previous articleRedmi K20 Pro, Redmi K20 set to launch today: How to watch the live stream
Next articleHyperX launches the first gaming keyboard which has its own switch design