Here is how you can watch the live stream of Poco F4 5G. 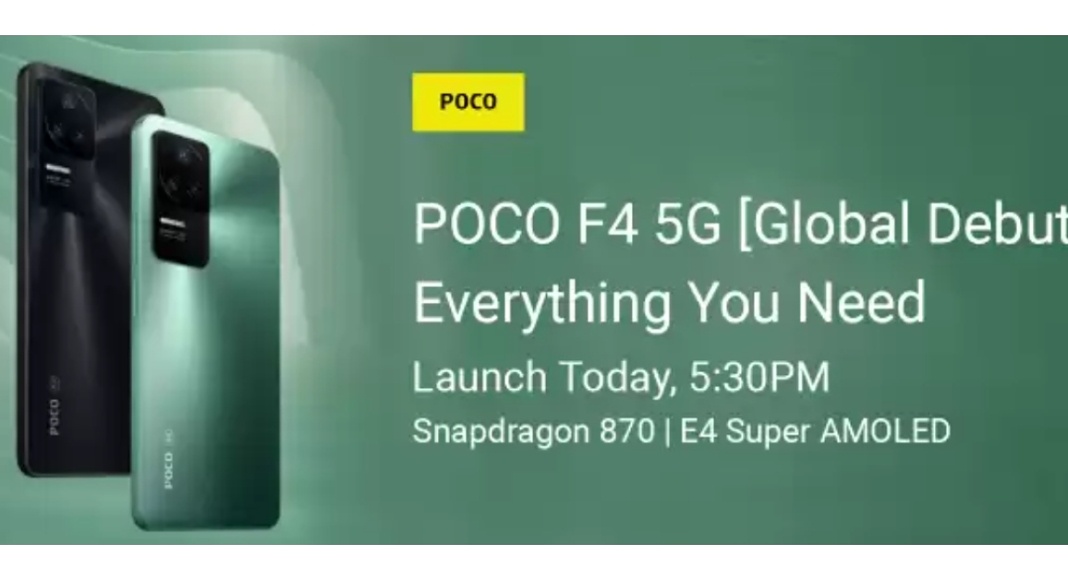 Poco is all set to launch a new smartphone in the Indian market today. The company will be announcing Poco F4 5G in the country via an online launch event. The company has already stated that the upcoming phone will be powered by the Snapdragon 870 chipset. It is rumoured to be a rebranded variant Redmi K40S that was launched in China. Moreover, the handset is speculated to come in two colour options as well as in two different configurations.

Poco will formally introduce the Poco F4 5G in India today. Starting at 5:30, there will be a Livestream and an online launch event. The online event will be broadcast live on Facebook, Twitter, and Poco’s official YouTube channel, among other social media sites. Although the company has not provided pricing or specification information, however, the phone has leaked several times ahead of its official announcement. The Chinese smartphone brand also confirmed that the smartphone will go on sale in India on June 23 at 5:30 p.m via Flipkart.

Ahead of the official announcement the prices and details for the Poco F4 5G have appeared on the Mi Home website in Poland. According to the Poco F4 5G’s pricing info, the 8GB RAM with 256GB storage variant will cost PLN 2,400 (approximately Rs 39,000), while the base model with 6GB RAM with 128GB storage is priced at PLN 2,200 (roughly Rs 42,650). Moonlight Silver and Night Black will be the colour options offered.

The Poco F4 5G, according to the description, has a 6.67-inch full-HD+ AMOLED DotDisplay with 1,080×2,400 pixels of resolution. The screen will support a 120Hz refresh rate and 300Hz touch sampling rate. Dolby Vision and Corning Gorilla Glass 5 protection will be there as well. The phone will run Android 12 and will be powered by Snapdragon 870 SoC and up to 8GB of LPDDR5 RAM. According to reports, the phone has LiquidCool 2.0 Technology with vapour chamber cooling. According to the description, the Poco F4 5G would have up to 256GB of UFS 3.1 storage.

Dual-band Wi-Fi 6, 5G, Bluetooth v5.2, and a USB Type-C connector are listed as connectivity possibilities. According to the listing, the phone would include a 4,500mAh battery with 67W cable charging compatibility. A side-mounted fingerprint sensor, Dolby Audio stereo speakers, and AI face unlock are also expected to come.

Komila Singhhttp://www.gadgetbridge.com
Komila is one of the most spirited tech writers at Gadget Bridge. Always up for a new challenge, she is an expert at dissecting technology and getting to its core. She loves to tinker with new mobile phones, tablets and headphones.
Facebook
Twitter
WhatsApp
Linkedin
ReddIt
Email
Previous articleMoto E32s Review: A really good budget smartphone for less than 10K
Next articleAmazon Quiz Answers Today 23 June 2022: Participate to win Rs 1,000