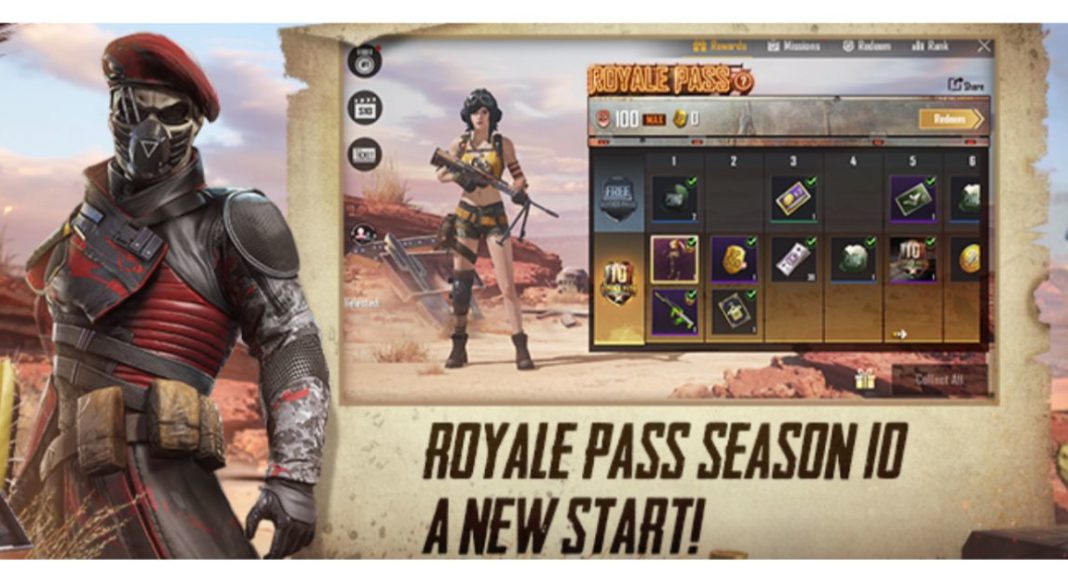 Tencent Games is all set to introduce a new season of popular mobile game PUBG. The company will bring the PUBG Mobile Season 10 update on November 8. The new update comes with lots of new improvements and content. The new season brings Royal Pass along with rewards and rewards.

First revealed by YouTuber Mr. Ghost Gaming about the beta update of the game version 0.15.5. The new update comes with a new gun- MP5K, new TDM Map – Ruins as well as Royal Pass Season 10 Apocalypse. The update will start rolling out from today onwards and the server will not be taken offline for this update. The new update requires 0.21 GB of storage space on Android and 0.24 GB of storage space on iOS devices.

The new update brings Team Deathmatch map Ruins. As per the changelog, the Mysterious ancient ruins are hidden in a rainforest where there are dense vegetation and winding paths.

A new gun has been added to the artillery in the season 10 of PUBG Mobile. The weapon is called MP5K which is a portable submachine gun that appears in Vikendi only replacing the Vector. The new gun has a high rate of fire at 900 RPM along with anti-recoil capabilities. MP5K also has a base damage of 33 and can be equipped with such as Tactical Stock, Mags, Attachments, Scopes, Foregrips, and Laser Sights.

The new season brings new rewards. According to the changelog, requests have been relaunched and Royale Pass can now be gifted. The Royal Pass can also be used directly in the pass upgrade page and the developer has made an improvement to User Interface for Royal Pass.

The UAZ in Vikendi has been replaced by Zima. The new vehicle is easier to drive and challenging to operate in Snowy terrain. As per the company, Zima is slower than other vehicles but more resistant to damage and can be used for alternate strategies.

The update will also bring a new character to the game Sara who is a Vehicle Engineer. Her abilities are Vehicle Enhancement, which reduces the damage taken by vehicles when she is driving or riding in a vehicle in EVO Modes.

Komila Singhhttp://www.gadgetbridge.com
Komila is one of the most spirited tech writers at Gadget Bridge. Always up for a new challenge, she is an expert at dissecting technology and getting to its core. She loves to tinker with new mobile phones, tablets and headphones.
Facebook
Twitter
WhatsApp
Linkedin
ReddIt
Email
Previous articleVivo to launch Vivo S5 smartphone with a triple rear camera to launch on November 14
Next articleGoogle offering coupons worth Rs 200 to the PUBG Mobile players for in-game item purchases: How to avail the offer