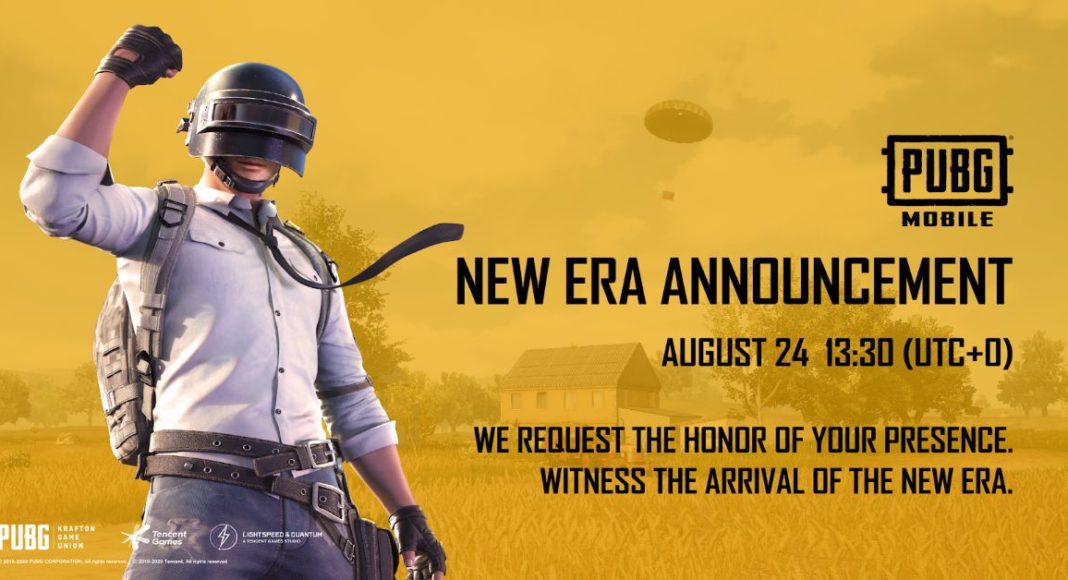 PUBG Mobile Game has become so popular that someday or the other it is in the news whether it is related to updates, announcements, or due to some bad reasons related to its addition in India. But this time it is in news for some other motive that might be related to a major update or it could be about its global mobile esports event this year, soon the company is going to make New Era Announcement.

On August 24 the PUBG Corp. is going to make a big announcement that will be live-streamed via its official YouTube channel as well as Facebook. The event will be kicked off at 1.30 PM IST. However, the developers did not reveal what the announcement will be about or what can be expected on the day. According to the company’s Twitter handle it has posted a Tweet which says “New Era for PUBG MOBILE!”

“On August 24th, PUBG MOBILE will be revealing a New Era Announcement, including a huge update of the game, as well as the biggest global mobile esports event of PUBG MOBILE in 2020. We want to invite you to tune into the announcement livestream at PUBG MOBILE official YouTube or Facebook channel on August 24th 13:30(UTC+0) for details, witnessing the arrival of the new era of PUBG MOBILE,” the company wrote.

The developers have not disclosed anything about the announcement but it is speculated to be about the revamped Erangel map 2.0 which is at the moment available in the beta version only. It is expected to receive Ultra HD graphics with some visual changes including new building designs such as Mylta Power, Quarry, Prison, and others. In addition to this, the map will include trenches, abandoned tanks, barricades and others. Moreover, there could be a new weapon called M1014 with a number of bug fixes and other improvements.

In a similar way, PUBG Mobile Esports Facebook page has also been updated teasing the New Era Announcement which could mean that the announcement might be related to the mobile esports event of 2020.

For the India gamers, the PlayerUnknown’s Battlegrounds (PUBG) Mobile has announced the name and the logo for its upcoming PUBG Mobile Campus Championship 2020 (PMCC 2020). Though the company has not disclosed the details related to the schedule, registrations, prizes and others. This is the second edition of the game, the first PMCC was a LAN tournament that was held in the year 2018.

Komila Singhhttp://www.gadgetbridge.com
Komila is one of the most spirited tech writers at Gadget Bridge. Always up for a new challenge, she is an expert at dissecting technology and getting to its core. She loves to tinker with new mobile phones, tablets and headphones.
Facebook
Twitter
WhatsApp
Linkedin
ReddIt
Email
Previous articleOppo set to launch Oppo A53 with Snapdragon 460 processor in India on August 25: Launch details and specifications
Next articleAugust 22 Amazon Quiz: Answer five easy questions to win Oneplus Y Series TV