Realme 3 India launch set to begin at 12 pm today: How to watch the live stream 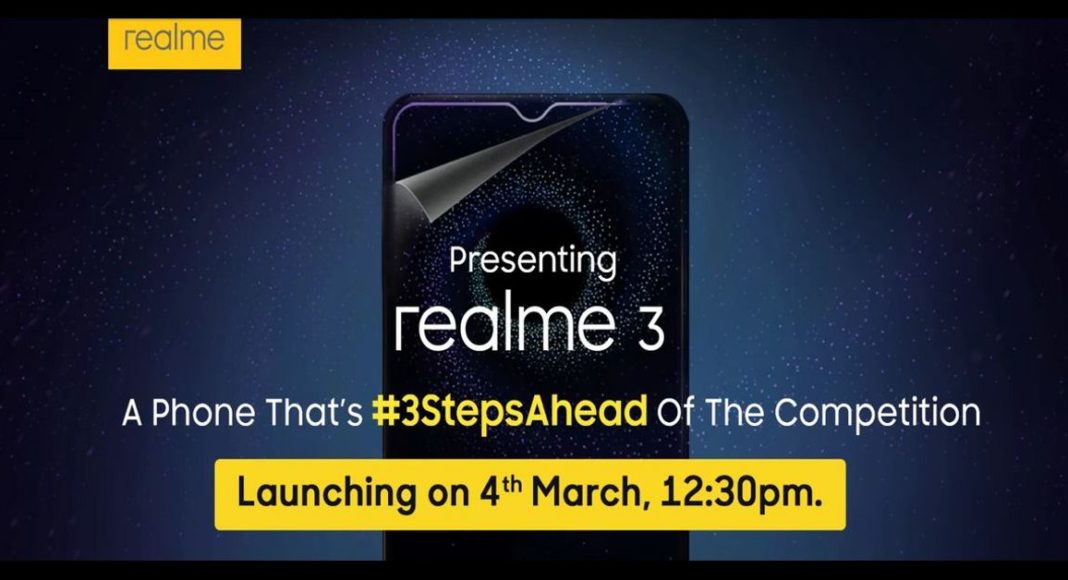 Although it has not been confirmed yet, Realme is also expected to launch the Realme 3 Pro smartphone at the same event today. Here’s everything that you need to know about the launch of the Realme 3 smartphone:

Realme 3 launch: How to watch the live stream?

The Chinese smartphone maker is launching the Realme 3 handset at an event in New Delhi today that is set to begin at 12 pm IST. Realme will be live streaming the launch event on its YouTube channel, so you can head there at 12 pm to watch it. We have also embedded the live stream video on this page so you can also watch it here.

The brand has put up a dedicated microsite on Flipkart that has given away some information about the Realme 3 smartphone. It revealed that the Realme 3 smartphone will be powered by a 12nm MediaTek Helio P70 processor while taking a dig at Redmi Note 7’s 14nm Snapdragon 660 SoC. It was also confirmed that the device will sport a waterdrop-shaped notch on its display and house a 4,230mAh battery. Realme also mentioned that it is more than the 4,000mAh battery on the recently launched Redmi Note 7 smartphone.

We should also mention that the Flipkart listing says that the smartphone will be available at an ‘unbelievable price’. However, we will have to wait for a few more hours before we can confirm the exact pricing.

Avani Baggahttp://www.gadgetbridge.com
Avani has an immense love for reading, travelling and food, but not necessarily in the same order. Avani almost started pursuing law, but life had other (better) plans for her and she chose to be a writer instead (luckily!) She previously covered technology at Times Internet and wrote about smartphones, mobile apps and tech startups. When she’s not writing, you’ll be able to find her in book stores or catching up on her social life.
Facebook
Twitter
WhatsApp
Linkedin
ReddIt
Email
Previous article
Apple is working on an Augmented Reality based headset: Report
Next article
OnePlus 7 renders show a pop-up selfie camera, triple rear camera setup