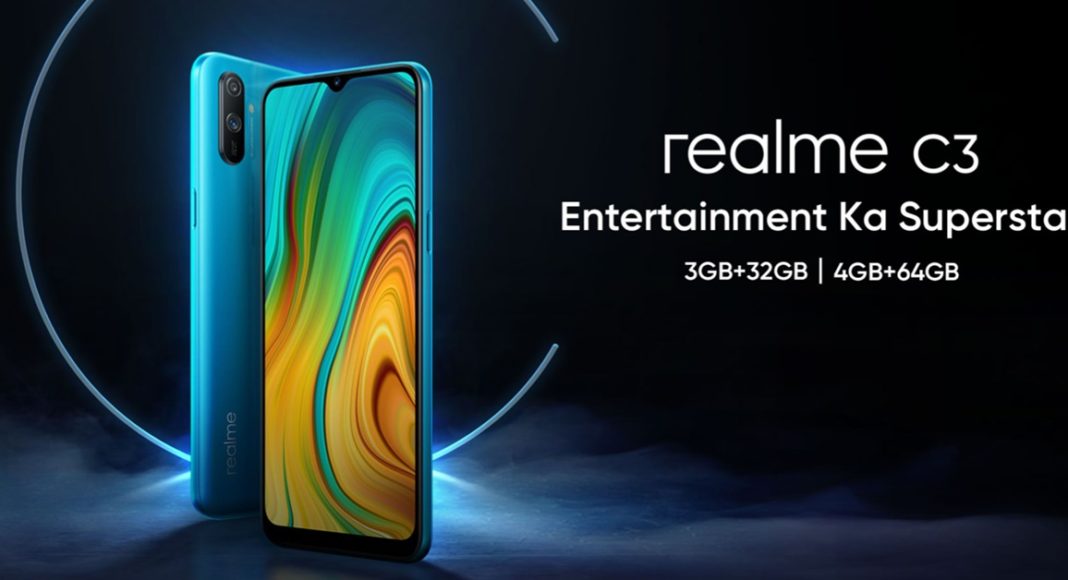 In what is being publicised as “Entertain Ka Superstar”, Flipkart has now lifted curtains off its soon-to-be-launched smartphone Realme C3. The China-based handset maker has revealed on the e-commerce platform that Realme C3 smartphone will be launched on Feb 6, 2020 at 12:30 pm.

Looking at the key specifications listed on Flipkart, it is revealed that Realme C3 smartphone will be available in two variants configuration:

Sporting a 6.5-inch minidrop display, Realme C3 will come equipped with a 5,000mAh battery. The teaser on Flipkart reveals that this smartphone promises to deliver a 30-day standby time once it’s fully charged. On the camera front, it has been showcased that Realme C3 smartphone will house AI-powered 12MP lens in the dual-camera structure that will hold four major feature like:

According to several leaked reports, Realme C3 smartphone is likely to run on ColorOS 7-based Realme UI processor along with Android 10 out-of-the-box.

Last year, Realme C3 and the Realme 5i were spotted on Singapore’s IMDA (Infocomm Media Development Authority) website. Popular tipster Sudhanshu Ambhore had tweeted that Realme C3 listing carries the model number ‘RMX1941′ as well as reveals that it will have LTE support, hinting that it is likely a non-5G smartphone. Only time will reveal how true these specifications are.

Realme has also slashed the price of its Pro version of Realme 5 by Rs 1,000 in India. The Realme 5 Pro, which was earlier available for Rs 13,999, now comes for Rs 12,999 on Flipkart as well as on the smartphone maker’s official website.

India’s smartphone market has left behind the US for the first time on an annual level to reach 158 million shipments in 2019 with 7% YoY growth, according to the latest research from Counterpoint’s Market Monitor service. This makes India the second-largest smartphone market in the world.