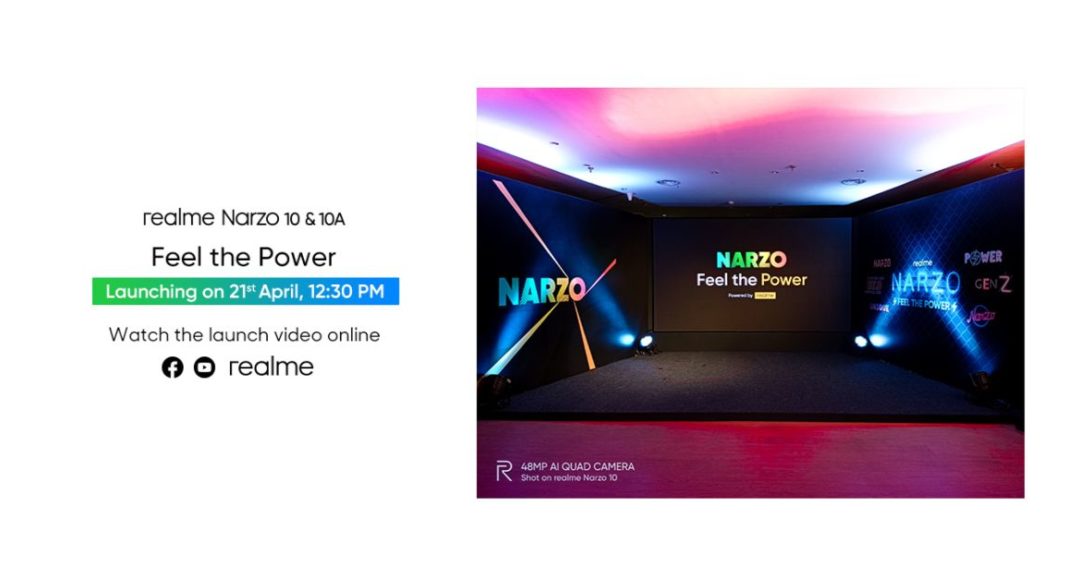 The Chinese smartphone company is all set to bring new smartphones to India. The company is planning to launch the all-new Narzo series that is going to include Narzo 10 and Narzo 10A smartphones. The company has now officially confirmed the launch date for the series. which is April 21. Recently the company delayed the release of the device due to lockdown, but now the company will take the support of the online launch to unveil the devices.

Recently, the Indian government issued an order allowing the commencement of the sale of all the electronics gadgets and smartphones starting April 20. The company immediately announced the official launch date for the Narzo series for the Indian market.

Realme’s CEO Madhav Sheth on Friday took to Twitter to announce that on April 21 the company will unveil the Realme Narzo series. To introduce the series the company will be hosting an online event that will begin at 12.30 pm IST. The CEO’s tweet reads, “Guys, here comes the news that you all have been waiting for! #realmeNarzo is back, so get ready to #FeelThePower! Watch the online video streaming live on 21st April at 12:30PM”

According to some reports, the Realme Narzo 10 is said to be a rebranded variant of Realme 6i. Whereas the Narzo 10A is likely to be another variant of Realme C3 that was launched in Thailand and Indonesia. So, this might again be an eyewash by the company to sell watered-down or not-up-to-the-mark stocks in India. 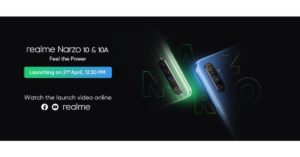 Though, Realme is teasing its upcoming series as the devices for the Gen Z many beg to differ. The company has also confirmed some of the key specifications of the Realme Narzo 10. It is going to feature a quad rear camera setup that is going to include a 48-megapixel sensor. As per the official teasers released by the company, the device has been seen showcasing the vertically placed quad camera set up on the back.

Also, it is going to pack a 5,000mAh battery with fast charging support. The Mobile will come with a 6.5-inch display with 89.8% screen-to-body ratio and a 3.5mm headphone jack. According to some leaks Realme Narzo 10 is expected to arrive with a 6.5-inch HD+display with 720×1,600 pixels of resolution. It is likely to be powered by a MediaTek Helio G80 processor, which could be a deal-breaker for many consumers.

As said, it is said to feature a quad-camera setup on the back, with a 48-megapixel primary sensor and a 16-megapixel selfie camera on the front. Some reports do suggest that Realme Narzo 10A is expected to draw its power from MediaTek Helio G70 chipset. It is said to sport a triple rear camera setup and a 6.5-inch HD+ display screen. It is likely to house a 5,000mAh battery. Will this sell in the Indian market? Only time will tell.

Komila Singhhttp://www.gadgetbridge.com
Komila is one of the most spirited tech writers at Gadget Bridge. Always up for a new challenge, she is an expert at dissecting technology and getting to its core. She loves to tinker with new mobile phones, tablets and headphones.
Facebook
Twitter
WhatsApp
Linkedin
ReddIt
Email
Previous article
Delhi government curfew e-Pass website goes down, here is how you can apply for an e-pass through other channels
Next article
April 18 Amazon Quiz: Answer all the questions to win GoPro Hero 8