Redmi 11 Prime alongside Redmi A1 launching in India today: Livestream details and more

Here is how to watch the event live. 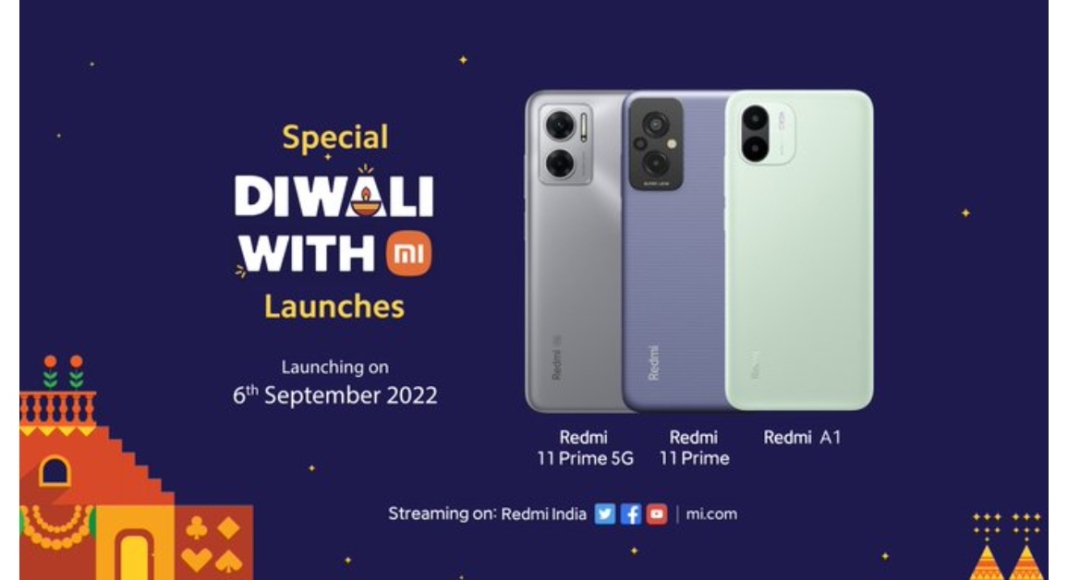 Today is the official launch date for the Redmi 11 Prime and Redmi A1 in India. Both the devices have been teased several times, therefore, revealing their key specification about them in advance of their release. A 50-megapixel triple back camera array is teased to be included on the Redmi 11 prime. Moreover, the smartphone is confirmed to be powered by MediaTek Helio G99 SoC, and a 5,000mAh battery. On the other hand, the Redmi A1 is rumoured to have an unnamed MediaTek processor, a 5,000mAH battery and a dual rear camera arrangement.

How to watch the Livestream?

Both the smartphone Redmi 11 Prime and Redmi A1 are set to make their debut in India today. At 12 noon the company’s YouTube channel will webcast the virtual event of the Redmi phones. Additionally, Xiaomi will broadcast the event on all of its social media accounts.

We have embedded the Livestream link below that will let you watch the launch event live right here on our website.

The company hasn’t yet released information about the new features or price of the Redmi 11 Prime. The images Redmi posted on the homepage show that the smartphone would be available in at least two colour options.

The display of the Redmi 11 Prime 5G will include a teardrop-shaped notch to make room for the selfie camera, according to Redmi’s microsite. The forthcoming phone will be powered by a MediaTek Dimensity 700 SoC. The smartphone will have a 50-megapixel dual rear camera system with an LED flash. With two SIM cards, 5G communication will be possible. On the right side of the frame, there will be a power button and volume rockers.

According to reports, the IMEI database contained the Redmi 11 Prime 5G, code-named Light, with the model number 1219I. The handset is believed to be a Redmi Note 11E that has been renamed as the Poco M4 5G. The phone was only recently found on the list of upcoming Xiaomi security updates.

Redmi A1 specification and price expected

A special microsite highlighting the salient characteristics of the new smartphone has also been made in advance of its formal release. The smartphone is rumoured to contain a 5,000mAh battery and a twin rear camera setup. Additionally, the company has not disclosed the name of the chipset, but it will be driven by a MediaTek processor.

The Redmi A1 will have a dual-back AI camera system with an LED flash. The back of the phone will feel like leather. When the smartphone is released, there will be at least three colour options.

The phone will be powered by a 5,000mAH battery, claims the microsite. The smartphone will include a pure Android experience and a secret MediaTek SoC, it has been claimed.

Redmi has not yet provided any other details, such as the anticipated price of the phone in India. The phone’s Geekbench listing suggested that it would have 3GB of RAM and come preinstalled with Android 12, according to reports.

Komila Singhhttp://www.gadgetbridge.com
Komila is one of the most spirited tech writers at Gadget Bridge. Always up for a new challenge, she is an expert at dissecting technology and getting to its core. She loves to tinker with new mobile phones, tablets and headphones.
Facebook
Twitter
WhatsApp
Linkedin
ReddIt
Email
Previous articleAmazon Quiz Answers Today 6 September 2022: Participate to win Rs 5,000
Next articleHow to tie a tie? Best 5 videos we found on the internet for different tie styles