Redmi A1+ India launch confirmed for October 14: Details inside

The device will come with Android 12 out of the box. 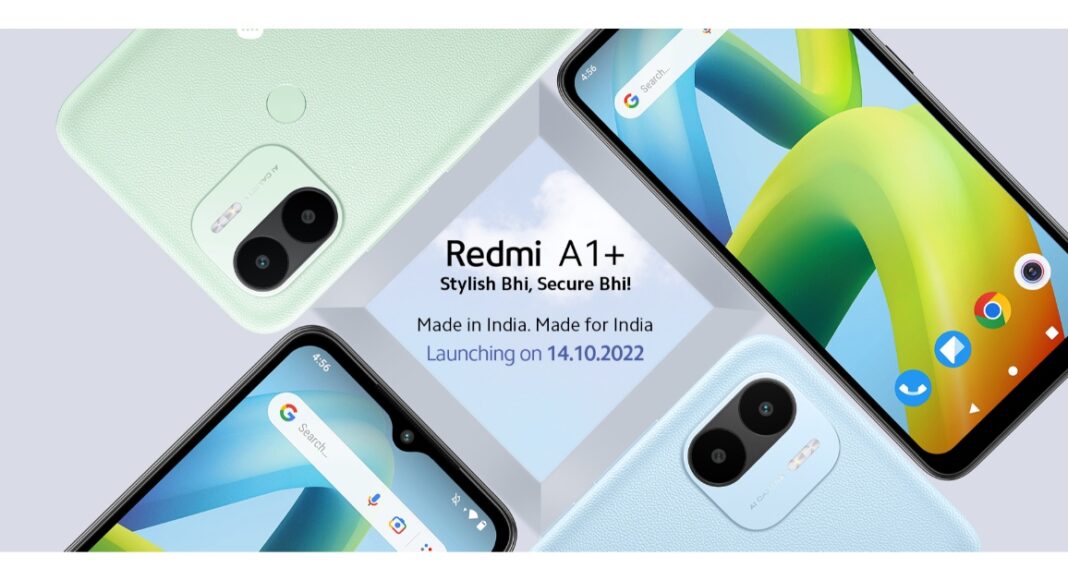 Xiaomi today announced that it will be launching another budget smartphone under its sub-brand Redmi. The company has officially confirmed the upcoming launch of Redmi A1+ in India which is scheduled to take place on October 14. Apart from revealing the launch date the company has also highlighted the key details of the upcoming phone. It will be featuring a 5,000mAh battery and will be powered by a MediaTek Helio A22 processor. Moreover, the device will come in three colour options to choose from.

Redmi A1+ is confirmed to release in India on October 14. On a dedicated webpage, Xiaomi disclosed some of the Redmi A1+ technical details before to the device’s national release.

The Redmi A1’s display will have a waterdrop notch. According to the company, the smartphone will run on Android 12 out of the box. The firm confirms that it will operate on “clean” Android 12.

It will draw its power from a 5,000mAh battery and will come equipped with an octa-core MediaTek Helio A22 SoC.

It will have a flash and a dual rear camera arrangement with an 8MP sensor. The Redmi A1+ will be offered in the colours blue, green, and black. The names of the colourways have not yet been disclosed.

The back part of the smartphone will have a leather texture finish and a fingerprint sensor.

The business released Redmi A1 at the beginning of the month. The affordable smartphone, which debuted alongside the Redmi 11 Prime series, is priced under ten thousand rupees. The MediaTek Helio A22 SoC powers the new phone. It has a 5,000mAh battery and comes pre-installed with Android 11. Additionally, the gadget has a twin back camera setup.

Redmi A1 is now available in India for Rs 6,499 for a single 2GB RAM and 32GB internal storage. It comes in the colours Light Green, Light Blue, and Classic Black.

Komila Singhhttp://www.gadgetbridge.com
Komila is one of the most spirited tech writers at Gadget Bridge. Always up for a new challenge, she is an expert at dissecting technology and getting to its core. She loves to tinker with new mobile phones, tablets and headphones.
Facebook
Twitter
WhatsApp
Linkedin
ReddIt
Email
Previous article
OnePlus Nord Buds CE Review: Well-tuned at an attractive price
Next article
Risk-free gambling or just clever marketing? The truth about online casino bonuses