The device is said to be a rebranded variant of Redmi Note 9 5G that launched in China in November last year. 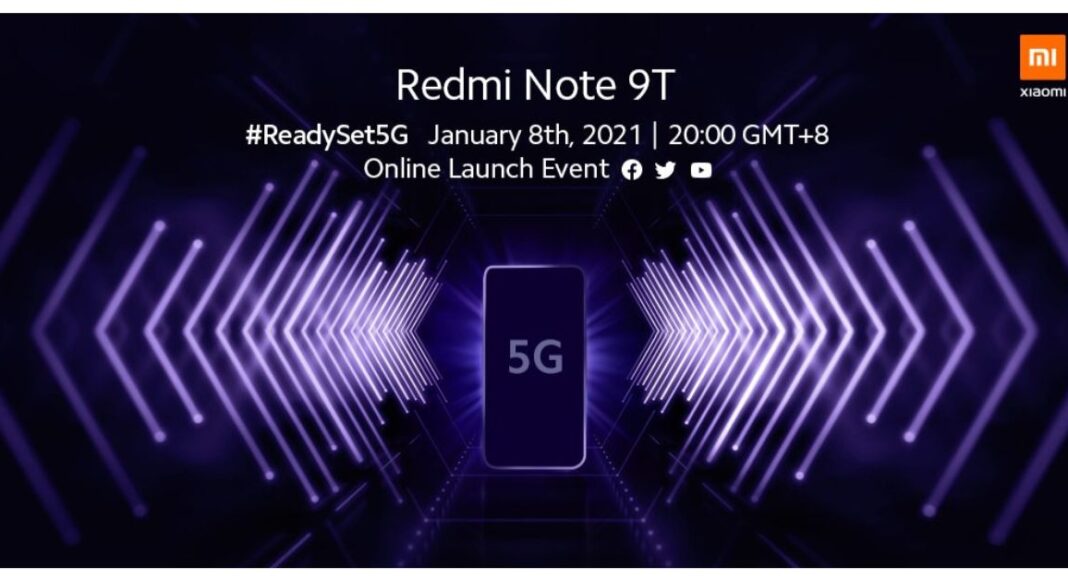 Redmi Note 9T specification, images and features have surfaced on the web several times. The device has also been spotted on Geekbench as well as NBTC listings too. But this time the Xiaomi smartphone’s full specifications have leaked while the company has announced the launch date for the mobile phone. The launch of the smartphone has been set for January 8 and has been confirmed through its social media accounts. The device is said to be a rebranded variant of Redmi Note 9 5G that was launched in China.

Xiaomi Redmi Note 9T is ready to launch in the European market on January 8. The launch event will kickstart at 1 pm GMT+1 and 5:30 pm as per Indian timings. The event will be live-streamed via the company’s official YouTube Channel as well as its social media accounts.

Speaking of the specifications, the listing revealed that Redmi Note 9T will feature a 6.53-inch full-HD+ display. The screen will have 90Hz refresh rate support. Under the hood, there is a MediaTek Dimensity 800U SoC in addition to a 5,000 mah battery and NFC support. Whereas the triple rear camera may include a 48-megapixel primary sensor.

Although all the key specifications have been revealed through the listing which is quite similar to Redmi Note 9 5G that launched in China. If this information is to be believed then other than the primary sensor other camera sensors will include an 8-megapixel wide-angle lens and a 2-megapixel macro lens. For selfies, it might feature a 13-megapixel front facing camera.

Komila Singhhttp://www.gadgetbridge.com
Komila is one of the most spirited tech writers at Gadget Bridge. Always up for a new challenge, she is an expert at dissecting technology and getting to its core. She loves to tinker with new mobile phones, tablets and headphones.
Facebook
Twitter
WhatsApp
Linkedin
ReddIt
Email
Previous articleDell unveils new products and software to transform work experience
Next articleLeaked: Samsung Galaxy S21 series will be priced upwards of Rs 76,000, tech specs revealed