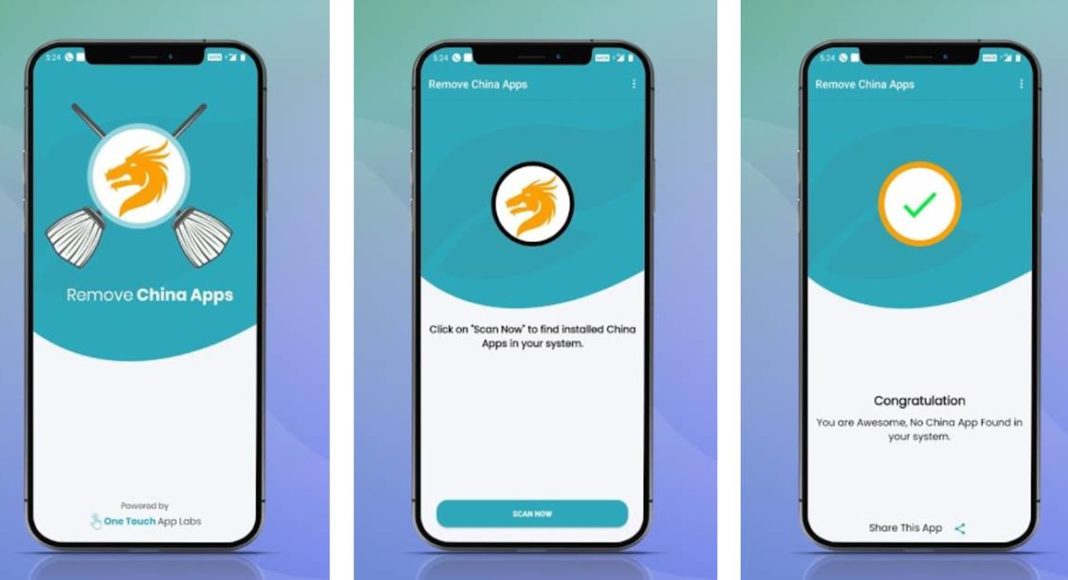 Within days after the launch of ‘Remove China Apps’, the creator OneTouch AppLabs, which is a Jaipur-based start-up, has now announced that its very first Initiative in direction of self-reliant India has crossed more than 1 million downloads. The app came in existence amid the growing anti-China sentiments in the country after engineer-turned-reformer Sonam Wangchuk made an appeal to the citizens of Indian to boycott Chinese products and “stop virtually financing the current military bullying in Ladakh and the South China Sea.”

According to Wangchuk, “If we citizens are clever we should use our wallet power rather than leaving it totally to our armies to respond with their bullets. The bullet response is what China is looking for as it helps unite its angry citizens to forgive the mistakes and forget the economic hardships caused by the regime’s poor handling of COVID 19.”

Now coming back to the ‘Remove China Apps’ by OneTouch AppLabs, this application has garnered 4.8 rating on Google Play Store. In order to install the app, one requires Android 4.0.3. or above version in the smartphones.

On it’s official website, the creators of ‘Remove China Apps’ have stated, “We have received 80,000 + appreciations in the last 2 days via email, google play store feedback and other mediums. Due to the high volume of feedbacks, we were not able to respond to all of feedbacks individually. We want to say Thank You to all of you. Thank You India for your love, appreciation and feedback. Thank you critics for your feedback, it will help us improve our services. Thank You Media for the courage of our initiative in the news. Thank you Sonam Wangchuk for your contribution in ‘Self-Reliant India’ mission. Thank you everyone who is helping PM Modi’s initiative ‘Self-Reliant India’.”

Notifying that the OneTouch AppLabs is working hard to improve ‘Remove China Apps’ as per received feedbacks, the start-up has also issued a disclaimer saying, “This application is being developed for educational purposes only to identify the country of origin of a certain application, we do not promote or force people to uninstall any of the application.” It further added that OneTouch AppLabs announced on its website that developers do not use it for commercial purposes.

Besides this, OneTouch AppLabs also clarified that detecting the country of origin of smartphone apps via ‘Remove China Apps’ is purely based on the market research. Therefore, the start-up does not guarantee for any correct or wrong information, so users should act only at their own will. Furthermore, Remove China Apps application identifies and showcases the installed application name only. All trademarks and/or copyrights and/or patents are the property of their respective owners.

Currently available only to Android-powered smartphone users, ‘Remove China Apps’ measures 3.5MB in size and is a free-to-download app. If you are wondering how you can access this app? Well, it has an easy-to-use interface as you simply need to tap your finger on the Scan Now tab in order to find out Chinese apps installed in your handset. Once done, this application by OneTouch AppLabs showcase you the Chinese apps downloaded in the device. Mind you! These apps will be removed only after you allow the permission to ‘Remove China Apps’ to uninstall.

Do let us know about your experience with ‘Remove China Apps’ in the comment section below.