HomeMobilesSamsung Galaxy A31 with a 5,000mAh battery all set to launch in...

Samsung Galaxy A31 with a 5,000mAh battery all set to launch in India

Here is how to watch the lunch event live 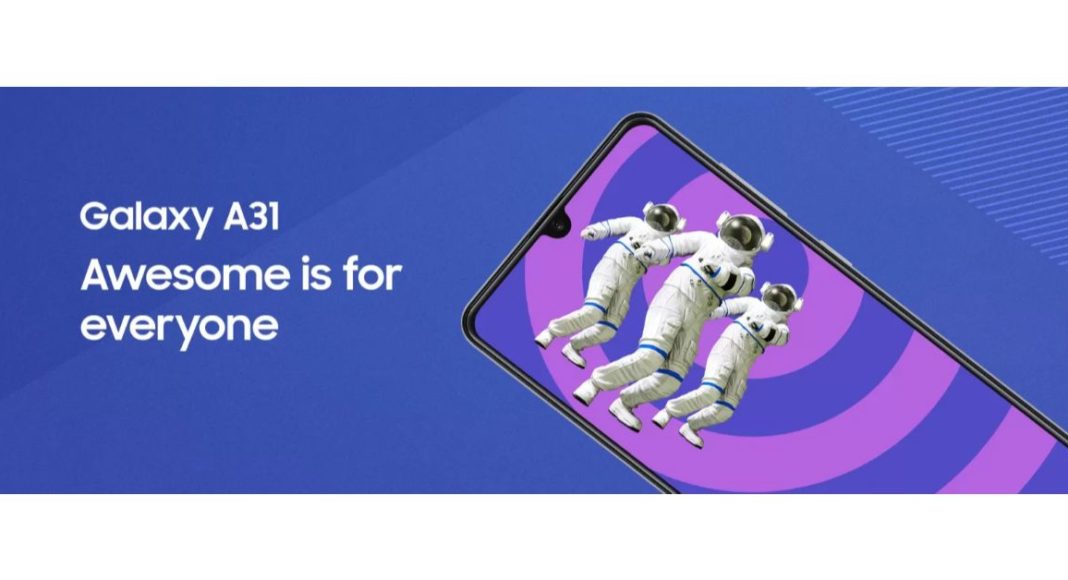 The South Korean company Samsung is on a launch spree. The company is today launching its much-awaited Samsung Galaxy A31 in India today. The device was introduced by the company months back in March. With the addition to this smartphone, the company is expanding its portfolio of most popular A-series which offer smartphones ranging from budget to mid-range segment. Galaxy A31 includes a massive 5000mAh battery, an Infinity-U design display and is powered by MediaTek Helio P65 SoC. Let’s have a look at what pricing is expected from Samsung and how to watch the live telecast of the launch of Samsung Galaxy A31.

The Samsung Galaxy A31 launch event is going to commence at 2 PM today in India via an online launch event. The launch event will be live-streamed via the company’s official YouTube channel across all its social media channels.

As per some reports Samsung Galaxy A31 is expected to come with a price tag of Rs 23,000 in the country. The company will make Galaxy A31 available in four colour variants Prism Crush Black, Prism Crush Blue, Prism Crush Red, and Prism Crush White. However, the smartphone has been listed on Flipkart prior to its launch. According to the e-commerce platform, the handset will go on sale at 3 PM onwards.

Samsung Galaxy A31 smartphone features a 6.4-inch Full HD+ Super AMOLED display with 1,080 x 2,400 pixels of resolution. It comes with an Infinity-U design display along with an in-display fingerprint sensor for authentication.  It will run on One UI 2.0 skinned on top of Android 10 and will also include Samsung Pay.

The device is powered by an octa-core processor with two cores clocked at 2.0GHz, and six at a 1.7GHz frequency speculated to be MediaTek Helio P65 SoC. The smartphone will be offered in two variants 4GB of RAM with 64GB of storage and 6GB of RAM with 128GB of internal storage. The storage can be expanded up to 512GB using an external SD card.

Komila Singhhttp://www.gadgetbridge.com
Komila is one of the most spirited tech writers at Gadget Bridge. Always up for a new challenge, she is an expert at dissecting technology and getting to its core. She loves to tinker with new mobile phones, tablets and headphones.
Facebook
Twitter
WhatsApp
Linkedin
ReddIt
Email
Previous articleHonor Play 4 and Honor Play 4 Pro with 5G support launched: Pricing and specification details
Next articleCOVID-19 crisis: Fitbit launches a low-cost emergency ventilator