Samsung Galaxy A50, Galaxy A30 and Galaxy A10 with Android Pie-based One UI launched in India: Price and specifications 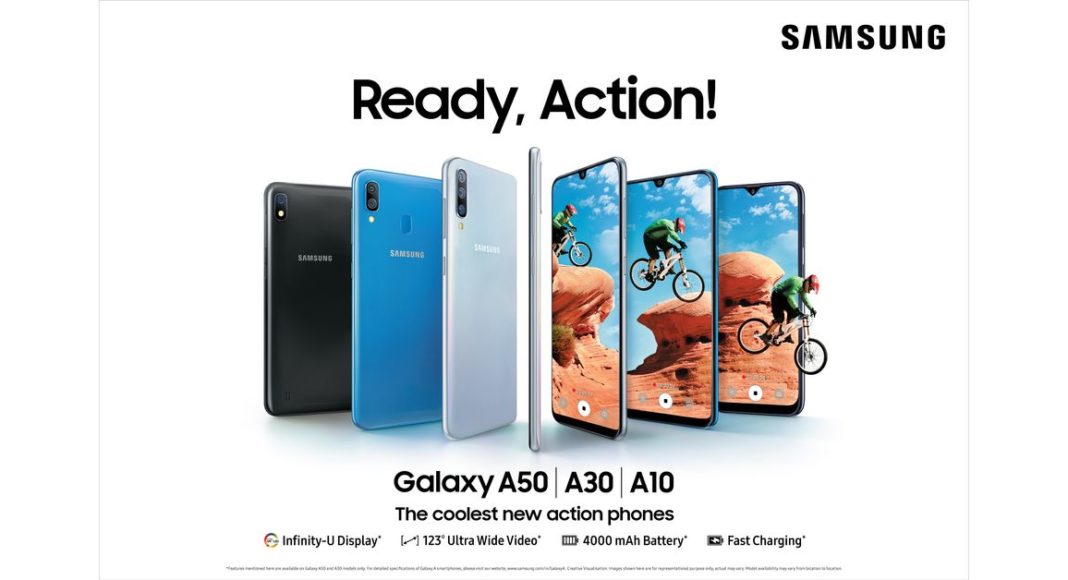 South Korean technology giant Samsung has today launched its Galaxy A-series smartphones in India. The smartphones from the Galaxy A-series sport Super-AMOLED displays along with multiple cameras. They also run Android Pie with Samsung’s One UI out of the box. The newly launched smartphones that are a part of the series are Samsung Galaxy A50, Galaxy A30 and Galaxy A10 which were earlier showcased at MWC 2019. Here’ s a look at the price, availability and specifications of the three devices:

Samsung Galaxy A50, Galaxy A30, Galaxy A10 price and availability in India

According to Samsung, the Galaxy A-series smartphones will price from the budget segment and go up to the Rs 50,000 mark. Coming to handsets that have been launched today, Samsung Galaxy A50 is priced at Rs 19,990 for the 4GB RAM + 64GB storage variant while its 6GB RAM + 64GB storage model will sell for Rs 22,990. Samsung Galaxy A30, on the other hand, costs Rs 16,990 while the Galaxy A10 will sell for Rs 8,490 making it the cheapest of the lot.

The newly launched Samsung Galaxy A50 and Galaxy A30 will be available from March 2 while the Galaxy A10 will start selling from March 20.

Samsung Galaxy A50 comes with 64GB storage and can support a microSD card of up to 512GB. For security, there is an in-display fingerprint scanner. The device houses a 4,000mAh battery with 15W fast charging and USB Type-C port.

Samsung Galaxy A30 also sports a 6.4-inch Full HD+ Super AMOLED Infinity-U display, however, it is powered by an octa-core Exynos 7904 SoC clubbed with 4GB of RAM. It comes with a dual rear camera setup that comprises of a 16MP sensor with f/1.7 aperture paired with a 5MP sensor with f/2.2 aperture. On the front, there is a 25MP sensor with fixed-focus with f/2.0 aperture.

The smallest of the lot, Samsung Galaxy A10 sports a 6.2-inch HD+ Infinity-V Display. It is powered by an octa-core Exynos 7884 SoC and has 2GB of RAM.

Aman Singhhttps://www.gadgetbridge.com/
Aman Kumar Singh has a Masters in Journalism and Mass Communication. He is a journalist, a photographer, a writer, a gamer, a movie addict and has a love for reading (everything). It’s his love of reading that has brought him knowledge in various fields including technology and gadgets. Talking about which, he loves to tweak and play with gadgets, new and old. And when he finds time, if he finds time, he can be seen playing video games or taking a new gadget for a test run.
Facebook
Twitter
WhatsApp
Linkedin
ReddIt
Email
Previous article
Energizer P18K Pop with a behemoth 18,000mAh battery launched at MWC 2019: Price and specifictaions
Next article
Samsung Galaxy A30 vs Redmi Note 7 Pro: Comparison