The smartphones are available for sale via Amazon, Flipkart and Paytm mall 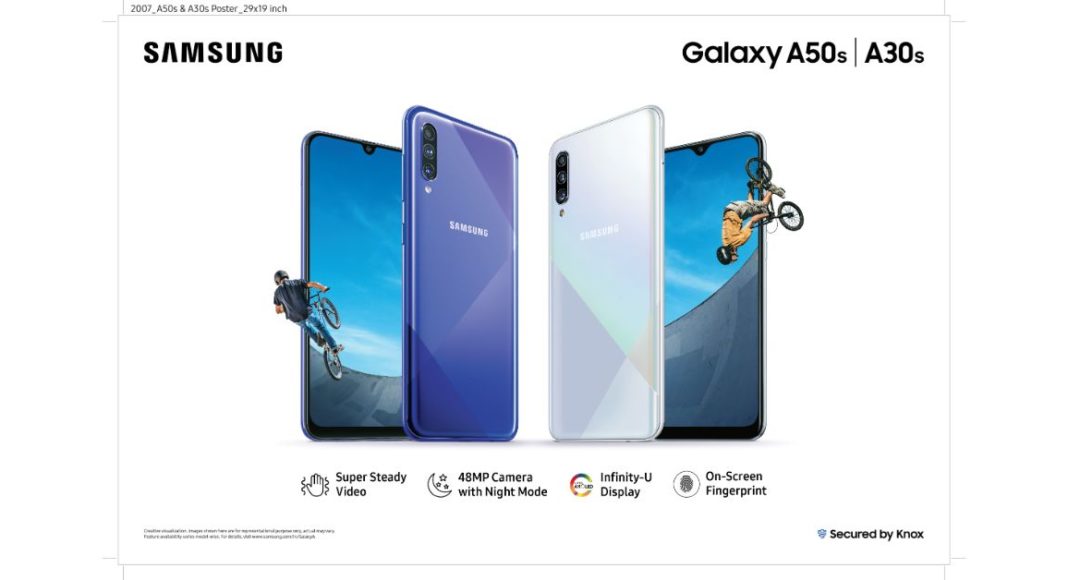 The South Korean smartphone company, Samsung, today launched two phones under its A-Series of smartphones. The company launched Samsung Galaxy A50s and Galaxy A30s in India. Both the phones fall under the mid-range price section. The two devices are the upgraded version of Galaxy A50 and Galaxy A30 phones that were launched by the company a few months ago.

The phones come with features like Night Mode, Super Steady video, Samsung Pay and a powerful processor with Game Booster technology as well as 4,000mAh battery. The smartphones will be available for purchase in both online and offline retailers across the country.

Samsung Galaxy A50s has been introduced in the country at a starting price of Rs 22,999 for the 4GB RAM version, whereas the 6GB RAM variant is available at Rs 24,999. The other one, Samsung Galaxy A30s single 6GB RAM variant will come at a price tag of Rs 16,999. Both the smartphones will come in three colour options Prism Crush Violet, Prism Crush Black and Prism Crush White colours. The smartphone will start to sell from today on Amazon, Flipkart, Paytm Mall and Samsung Online Shop along with partnered offline retailers across the country.

Telecom companies such a Reliance Jio, Airtel will provide double data benefits on the purchase of the handsets whereas Vodafone subscribers who purchase either of the phones will receive Rs 75 cashback on Rs 255 prepaid recharge along with additional 0.5GB daily data valid for 18 months.

Samsung Galaxy A50s is powered by octa-core Exynos 9611 SoC processor. It features a 6.4-inch full-HD+ (1,080×2,340 pixels) Infinity-U Super AMOLED display. The smartphone runs on Android 9 Pie with One UI on top along with 4,000mAh battery with 15W fast charging support. The phone comes with 6GB of RAM along with 128GB of internal storage that is expandable up to 512GB using microSD card. There is also an in-display fingerprint sensor.

Samsung Galaxy A30 features a 6.4-inch HD+ (720×1,560 pixels) Infinity-V Super AMOLED display. The phone runs on Android 9 Pie with One UI on top. It is powered by an octa-core Exynos 7904 SoC, coupled with up to 4GB of RAM and 64GB of internal storage that can be expanded via microSD card up to 512GB. The phone has an in-display fingerprint sensor along with a 4,000mAh battery with 15W fast charging support.

Coming to the camera quality, the phone comes with a triple rear camera set up. The setup includes a 25-megapixel primary sensor with f/1.7 aperture, an 8-megapixel ultra-wide-angle camera and a 5-megapixel depth sensor. While on the front, Samsung Galaxy A30s sports a 16-megapixel selfie camera with f/2.0 aperture.

Komila Singhhttp://www.gadgetbridge.com
Komila is one of the most spirited tech writers at Gadget Bridge. Always up for a new challenge, she is an expert at dissecting technology and getting to its core. She loves to tinker with new mobile phones, tablets and headphones.
Facebook
Twitter
WhatsApp
Linkedin
ReddIt
Email
Previous articleOppo launched A9 2020 and A5 2020 smartphones in India with 5,000mAh battery
Next articleAirtel launched Rs 3,999 Airtel Xstream Fiber broadband plan to take the fight with Reliance Jio