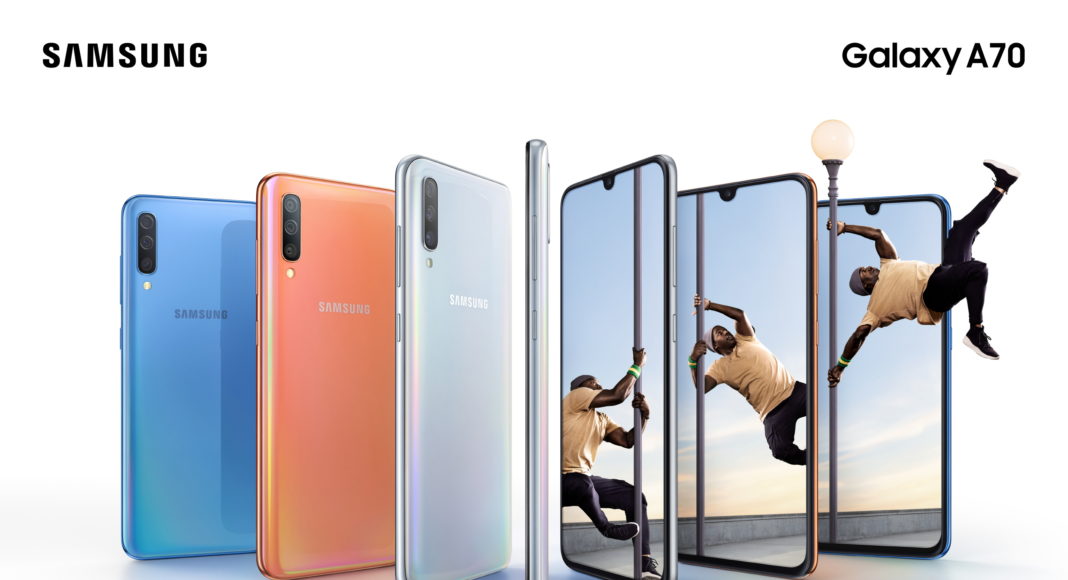 Samsung is keeping its promise to launch more handsets in its Galaxy A-series smartphones and has released the Galaxy A70 today at an event in Bangkok. Samsung Galaxy A70 was launched alongside the Galaxy A80 at the event called ‘A Galaxy Event’ in Bangkok.

According to the company, the Samsung Galaxy A70 is focused on the youth to keep up with the changing internet world of today, and it allows them to capture, connect and share their life on the internet. The Galaxy A70 comes with a stylish design, Infinity-U display and a triple-rear camera setup. The Samsung Galaxy A70 also packs a huge battery and an in-display fingerprint scanner. Here’s a look at all its details:

Samsung Galaxy A70 price and availability

Till now, Samsung hasn’t revealed the price or the availability of the Samsung Galaxy A70, but since the device has been introduced and launched it will be made available in the markets soon.

The Samsung Galaxy A70 comes in four colour options – Black, Blue, Coral and White and features a Glasstic build. It also has a prism effect which reveals the gradient finish at its back depending on which direction the light hits it from.

DJ Koh, President and CEO of IT & Mobile Communications Division at Samsung Electronics said, “Today’s consumers are using their phones in a more visually active and authentic way – sharing their experiences and staying connected longer. These connections can only thrive when the most essential features allow people to enhance interactions through spontaneous, collaborative, and genuine connection. This requires an evolution. Which is why, to meet the needs of this emerging generation, we created the new Galaxy A70 – designed for the way people are connecting now.”

The Samsung Galaxy A70 sports a 6.7-inch Full HD+ (1080 x 2400 pixels) Super AMOLED Infinity-U display with an aspect ratio of 20:9. The device is powered by an octa-core CPU with dual 2.0GHz core along with six cores clocked at 1.7GHz. Although Samsung hasn’t mentioned which processor is powering up the Galaxy A70 but depending on the company’s history of using CPUs and the region, it could either be from Qualcomm Snapdragon or Exynos.

Samsung Galaxy A7 comes with 6GB and 8GB RAM variants with a single 128GB storage option. The device also supports microSD card of up to 512GB and has a dedicated slot for it. The Samsung Galaxy A70 comes with dual-SIM card support and it packs a huge 4,500mAh battery with Super-Fast charging support. The newly launched smartphone runs Android 9 Pie skinned with One UI and it comes with in-display fingerprint scanner along with a face unlock feature. Its dimensions are 164.3 x 76.7 x 7.9 mm.

On the camera front, the Samsung Galaxy A70 holds a triple rear camera setup which comprises of a 32MP main camera with an f/1.7 aperture paired with an 8MP ultra-wide sensor with an f/2.2 aperture and 123 degrees along with a 5MP depth sensor with an f/2.2 aperture. While on the front there is a 32MP selfie camera as well with an f/2.0 aperture. The rear camera of the Samsung Galaxy A70 can recognize up to 20 scenes and it also comes with Flaw Detection which automatically identifies glitches.

Aman Singhhttps://www.gadgetbridge.com/
Aman Kumar Singh has a Masters in Journalism and Mass Communication. He is a journalist, a photographer, a writer, a gamer, a movie addict and has a love for reading (everything). It’s his love of reading that has brought him knowledge in various fields including technology and gadgets. Talking about which, he loves to tweak and play with gadgets, new and old. And when he finds time, if he finds time, he can be seen playing video games or taking a new gadget for a test run.
Facebook
Twitter
WhatsApp
Linkedin
ReddIt
Email
Previous articleSamsung Galaxy A80 with full-screen display, rotating cameras launched: Get all the details here
Next articleUber Vouchers service launched in India, aimed at businesses