The device will be backed by a 6,000mAh battery 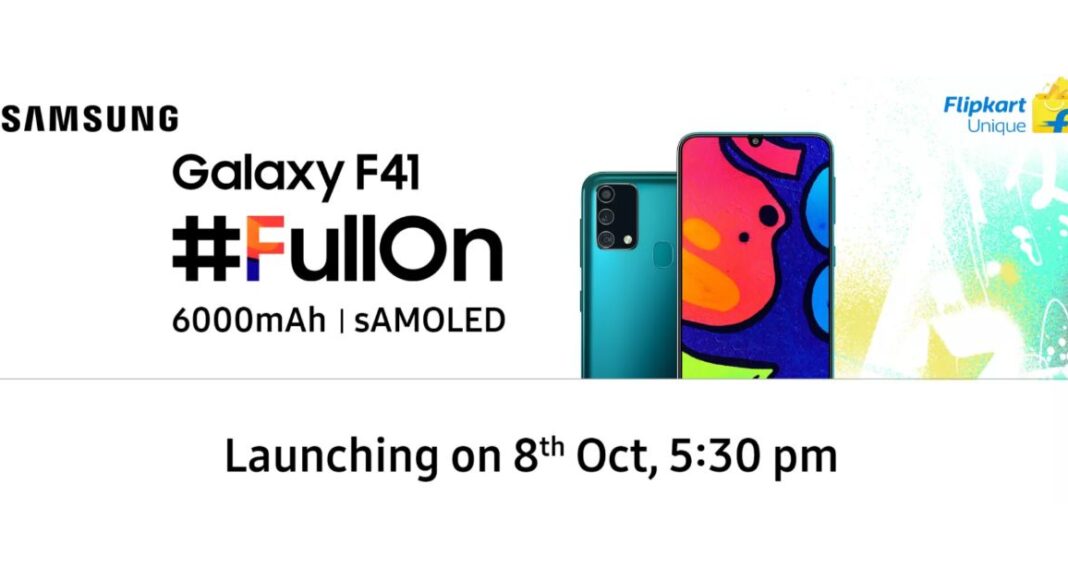 On October 8 Samsung is bringing a new smartphone in India. The company is going to launch the Samsung Galaxy F41. Until now the company was only teasing the arrival of its new device in the country via all its social media channels including Flipkart but today it has revealed that F41 is going to feature a  64-megapixel triple camera set up. This feature has been teased via a dedicated microsite created by the company on Flipkart.

The company last week revealed the launch date for the Samsung Galaxy F41 through all its social media channels as well as via Flipkart page. At that time the company did not reveal any other information concerning its specs and pricing. Today via its dedicated microsite the company revealed that the phone will feature a 64-megapixel image sensor with a Single Take feature. In addition to this, the company has also confirmed a 6,000mAh battery for the F41.

The Flipkart page furthermore reveals that the phone will be sporting a Super AMOLED display with an Infinity-U design and a rear-mounted fingerprint scanner. As of now this much information as been publicised but as the launch date comes closer the company will expose more about its upcoming smartphone.

In the past Galaxy, F41 was also spotted listed on Geekbench. The benchmarking website also revealed a 6,000mAh battery and a Super AMOLED Infinity-U display with sleek bezels on the sides. As per the listing, the device will have a triple rear camera setup and a rear-mounted fingerprint scanner. It will be powered by Exynos 9611 processor with 6GB of RAM. The device is said to run Android 10.

Moreover, the handset’s schematic was also leaked with model number SM-F415F. The mobile phone is suggested to feature a water drop-style notch to house a selfie camera. The SIM card slot is positioned on the left edge and on the right volume button and the power key is given. At the bottom, a USB Type C port, and a 3.5mm audio jack is seen whereas on the back of the phone the device will carry a triple camera setup with a flashlight along with a rear-mounted fingerprint scanner. Also, the smartphone will be offered in two storage options and three colour variants Black, Blue, and Green.

To recall the Samsung Galaxy F41 will launch on October 8 at 5.30 PM. The company will be hosting a virtual launch event that will be live-streamed across all its social media channels via YouTube.

Komila Singhhttp://www.gadgetbridge.com
Komila is one of the most spirited tech writers at Gadget Bridge. Always up for a new challenge, she is an expert at dissecting technology and getting to its core. She loves to tinker with new mobile phones, tablets and headphones.
Facebook
Twitter
WhatsApp
Linkedin
ReddIt
Email
Previous article
September 29 Amazon Quiz: Answer these five questions and you could win Sony Speakers
Next article
Vivo V20 Series October 12 launch tipped for India