The Galaxy M31s will be available at Amazon.in, Samsung.com and select retail stores from 12 noon on August 6. 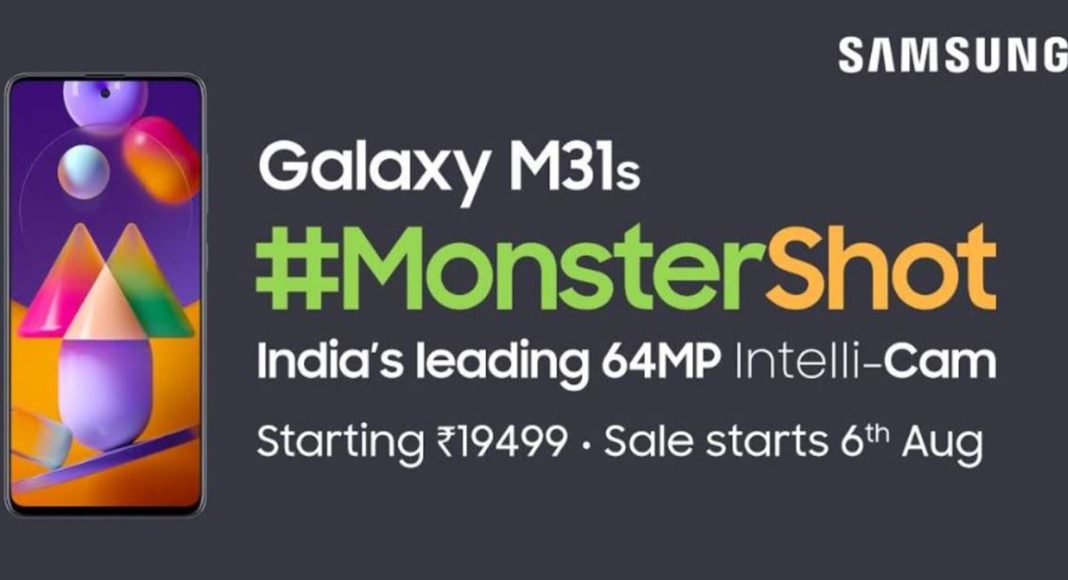 “The Galaxy M series has been designed ground-up in India and we are grateful to our consumers for making the brand so successful in such a short time. With Galaxy M31s, we are aiming to redefine camera experience for young consumers. We are confident that Galaxy M31s, with its 64MP Intelli-Cam and Single take feature, will truly set the benchmark for camera performance in the mid segment,” said Asim Warsi, Senior Vice President, Samsung India.

On the camera front, Samsung Galaxy M31s smartphone sports a 64MP quad-camera setup, with the new sensor that have depth, detail and definition. The M31s’ 12MP Ultra-Wide lens has a 123-degree field of view for capturing the world as you see it. It also has a dedicated 5MP Macro lens and 5MP depth lens. The Galaxy M31s is capable of 4K recording and it supports hyperlapse, slow-mo and super-steady modes. In addition, Samsung Galaxy M31s has a dedicated night mode for great low light photography. For selfie freaks, the 32MP front camera also supports 4K video recording and slow-mo selfies. The Intelli-Cam features in “Single Take” set a new benchmark in camera experience. With “Single Take”, all you have to do is press record at the right moment and Galaxy M31s will capture the footage, up to 10 seconds of it, and then use AI to produce up to 10 different outputs – 7 photos and 3 videos. The users can also customize their photos with up to 99 filters.

Samsung Galaxy M31s sports a 6.5-inch super AMOLED Infinity-O display along with Widevine L1 certification that enables consumers to watch high definition content across streaming platforms. It also features a premium Gradient design and comes with side finger-print scanner and fast face unlock. The Galaxy M31s will run on Android 10 out-of-the-box with Samsung’s new One UI for a smooth, lag-free experience.

As far as the battery is concerned, Samsung Galaxy M31s uses industry-leading 6000mAh battery that can easily last the entire day and night. It also comes with an in-box Type C 25W fast charger. The M31s for the first time also has reverse charging as it comes with a Type C to Type C cable for the 25W In-box charger.

Mind you! The Galaxy M31s will be available at Amazon.in, Samsung.com and select retail stores from 12 noon on August 6