Samsung Galaxy M53 5G set to launch in India on April 22: What to expect

The device has been listed on Amazon ahead of the official launch. 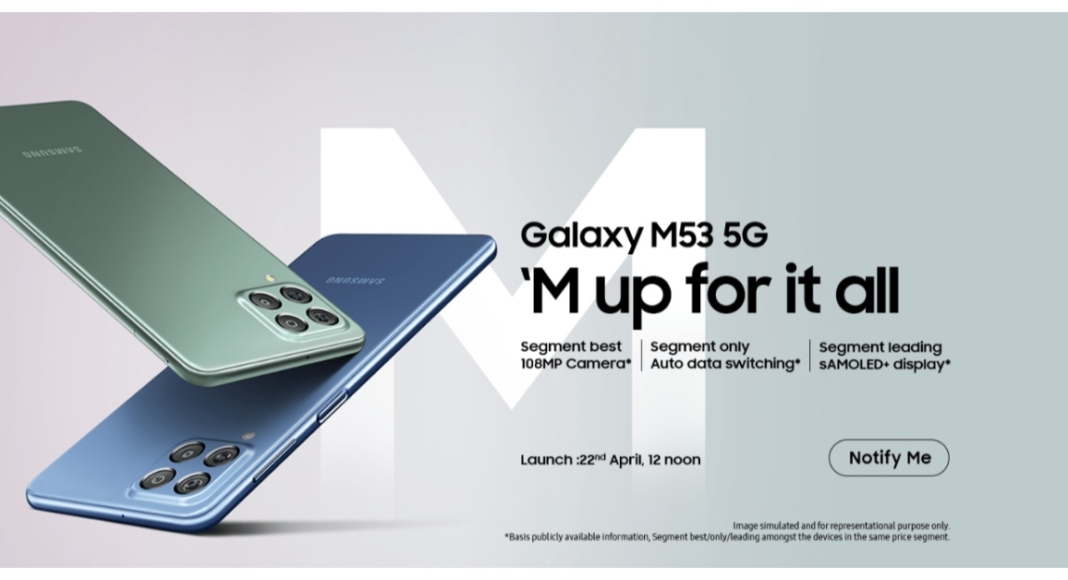 The launch date for the Samsung Galaxy M53 5G in India has been announced. As per the South Korean giant, its next 5G smartphone will arrive in the country on April 22. To recall, the device made its global debut earlier this month. It is the successor to the Galaxy M52 5G that was launched in the country last year. The upcoming smartphone is confirmed to have a Super AMOLED+ display with a 120Hz refresh rate with a hole punch to house a selfie camera. Additionally, the phone will feature a 108-megapixel primary rear camera.

Samsung has revealed the Galaxy M53 5G’s India launch date. It is set to take place on April 22. Just ahead of the announcement the company has created a microsite alongside it that has been separately listed on Amazon to tease its availability. As per the teaser, the upcoming phone will launch at 12 noon.

Samsung announced earlier this month that the Galaxy M53 5G will be available in a 6GB RAM with 128GB storage configuration, with other configurations likely to follow.

Samsung Galaxy M53 5G is the company’s most powerful M series smartphone, according to the company. It is designed for Gen Z and young millennials. A 108 MP camera, segment-only Auto data switching, and a sAMOLED+ display are said to be included in the device.

When the primary SIM loses network, the innovative Auto data switching feature allows customers to stay connected to their secondary SIM for calls or data streaming. The Galaxy M53 5G’s sAMOLED+ display provides immersive experiences, while the Infinity-O display with a 120Hz refresh rate is protected by Gorilla Glass 5.

As we mentioned earlier Galaxy M53 5G was announced globally this month. So it is expected to ship with Android 12 and One UI 4.1 on top. It may have a 120Hz peak refresh rate Infinity-O Super AMOLED+ display with a 6.7-inch full-HD+ with 1,080×2,400 pixels of resolution. The will be powered by a yet-to-be-named octa-core SoC.

The global variant features a quad-camera system with a 108-megapixel primary sensor, an 8-megapixel ultra-wide sensor, a 2-megapixel depth sensor, and a 2-megapixel macro sensor. It also comes with a 32-megapixel front-facing camera for selfies and video chats. The Samsung Galaxy M53 5G houses a 5,000mAh battery that supports 25W fast charging.

Komila Singhhttp://www.gadgetbridge.com
Komila is one of the most spirited tech writers at Gadget Bridge. Always up for a new challenge, she is an expert at dissecting technology and getting to its core. She loves to tinker with new mobile phones, tablets and headphones.
Facebook
Twitter
WhatsApp
Linkedin
ReddIt
Email
Previous article
iQoo Z6 Pro 5G India launch confirmed for April 27: Expected price and specifications
Next article
Samsung Galaxy A53 5G Review: Should You Pick It Up In This Price Range?