South Korea technology giant Samsung has announced its Galaxy Unpacked event that is scheduled to take place in San Francisco on February 20. Although the company has not revealed what it has up its sleeve for the event, it is quite evident that Samsung will be launching its three Galaxy S10 smartphones at Galaxy Unpacked. These will include Samsung Galaxy S10, Galaxy S10+ and a lite version of the device. The smartphone giant has also hinted that its much-talked-about foldable Galaxy F may also be launched at the event. But only time will tell if that will happen.

While the poster confirmed that the smartphone in the image shared is Samsung Galaxy S10+, he removed the watermark on the screen with the device’s serial number and his employee ID. It is being said that the image looks like it has been taken on the bus which was either going to Samsung Electronics’ Suwon campus or coming back from it. It is also worth noticing that the smartphone in the picture is kept inside its pre-production case, which was probably used to hide the design until it is launched. 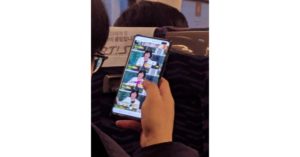 We should also mention that the company has already used the Infinity-O display, that comes with a hole on it to house the selfie camera, in Samsung Galaxy A8s smartphone. The same technology was also seen in Honor View 20 and Huawei Nova 4.

Avani Baggahttp://www.gadgetbridge.com
Avani has an immense love for reading, travelling and food, but not necessarily in the same order. Avani almost started pursuing law, but life had other (better) plans for her and she chose to be a writer instead (luckily!) She previously covered technology at Times Internet and wrote about smartphones, mobile apps and tech startups. When she’s not writing, you’ll be able to find her in book stores or catching up on her social life.
Facebook
Twitter
WhatsApp
Linkedin
ReddIt
Email
Previous article
Xiaomi will bring a bigger unique fingerprint sensor to it’s next wave of smartphones
Next article
iPad mini 5, new affordable iPad expected to launch in first half of 2019