Samsung Galaxy Tab A7 Lite to launch in India on June 23, gets listed on Amazon 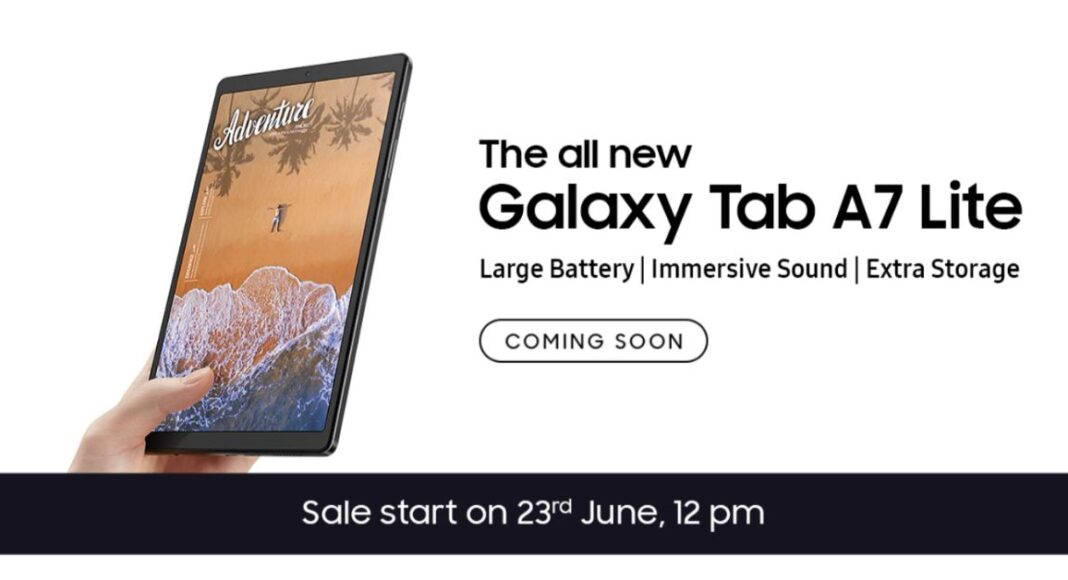 After launching Samsung Galaxy Tab A7 Lite in the UK, the tablet is all set to make its way to the Indian market soon. The company has officially announced to launch the tab on June 23 in India. The device has also been listed on Amazon ahead of the launch to tease its availability. The listing also reveals the key highlights of the device that includes a 5,100 mAh battery and an 8.7inch display with Dolby Atmos support. The Samsung Galaxy Tab A7 Lite is powered by MediaTek Helio P22T and runs Samsung One UI based on top of Android 11 out of the box.

Samsung Galaxy Tab A7 Lite is scheduled to launch in India on June 23. The company has not planned a launch event and would simply list it on the e-commerce website Amazon. This means as soon the device is announced it will be immediately available for purchase at 12 noon. As of now, there is no confirmation whether both Wi-Fi or LTE models will be available or not.

On the specifications front, the Tablet features an 8.7-inch display. The tablet runs Samsung One UI based on top of Android 11 and is powered by MediaTek Helio P22T paired with up to and 4GB of RAM and 64GB of storage. The internal storage can be expanded up to 1TB using a microSD card.

In addition, there is a single 8-megapixel main sensor on the back of the phone and a 5-megapixel camera sensor for taking selfies on the front. It also packs a 5,100mAh battery that supports 15W fast charging.

For connectivity, there is 4G LTE (optional), Wi-Fi 802.11ac, Bluetooth v5, GPS, USB Type-C, and a 3.5mm audio jack. The sensor on the tab includes an accelerometer, ambient light sensor, and magnetometer.

Komila Singhhttp://www.gadgetbridge.com
Komila is one of the most spirited tech writers at Gadget Bridge. Always up for a new challenge, she is an expert at dissecting technology and getting to its core. She loves to tinker with new mobile phones, tablets and headphones.
Facebook
Twitter
WhatsApp
Linkedin
ReddIt
Email
Previous articleVivo Y73 confirmed to launch in India on June 10, teaser released
Next articleTop 10 smartphones with the highest megapixel selfie camera in India