Samsung Galaxy A80 is up for pre-orders on Flipkart

The key highlights of the smartphone include a rotating camera setup

Samsung officially announced the arrival of the Galaxy A80 smartphone in India last week. But prior to its launch in the country, Samsung Galaxy A80 was launched globally in April this year. The smartphone is now available for pre-order in India. While the pre-bookings of Samsung Galaxy A80 began on July 22, they will go on till July 31.

The key highlights of the smartphone include a rotating camera setup along with a bezel-less display and features like Super Steady Mode and Live Focus videos. Apart from that, the smartphone from Samsung is powered by an octa-core Qualcomm Snapdragon 730 SoC. The company is offering a number of pre-launch offers to the buyers of Samsung Galaxy A80. On the purchase of the smartphone via the Samsung India website, the buyers can avail a 5 percent cash back. On the other hand, Flipkart is offering various offers and discounts on the pre-order of Samsung Galaxy A80 too.

Samsung Galaxy has been introduced in the country at a price of Rs47,990. The device is available in a single 8GB RAM/128GB storage variant. The buyers can choose the device in three colours: Ghost White, Phantom Black, and Angel Gold.

The smartphone is now available for registration on Samsung India Website as well as Flipkart. The buyers are offered a cashback of 5 percent if they pay via Citi Bank Credit card. In addition to this, no-cost EMI and a one-time screen replacement of Samsung Galaxy A80 worth Rs 990 is also being offered on the pre-booking of the smartphone. 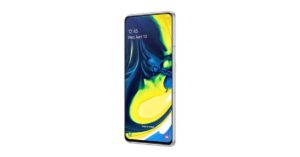 During the registration of the device, Flipkart is offering a discount of up to Rs 17,900 on the exchange of old devices. Axis Bank card users can avail a 5%discount while pre-booking the Samsung Galaxy A80 on Flipkart. The pre-booking of the smartphone has already started from July 22 and will finish on July 31. It is expected that the smartphone will be up for sale from August 1.

Samsung Galaxy A80 features a 6.7-inch full-HD+ (1080×2400 pixels) super AMOLED ‘New Infinity Display’ that has an aspect ratio of 20:9along with an in-display fingerprint sensor.

The device is powered by an octa-core Snapdragon 730G SoC, paired with 8GB of RAM. The handset runs Android Pie with One UI baked on top. The smartphone offers a 128GB of internal memory and it boasts of a 3,700mAh battery that supports 25W fast charging.

On the imaging front, Samsung Galaxy A80 features a rotating camera module that houses of a 48MP primary sensor with an f/2.0 lens, an 8MP secondary ultra-wide-angle sensor and a 3D depth camera with an IR sensor. When the user goes for the selfie mode, the camera module – without any human intervention–slides up and rotates. In addition to this, it comes loaded with a Super Steady mode that claims to reduce video shake. It comes with pre-loaded with various other features that enhance the photography experience of the user.

Komila Singhhttp://www.gadgetbridge.com
Komila is one of the most spirited tech writers at Gadget Bridge. Always up for a new challenge, she is an expert at dissecting technology and getting to its core. She loves to tinker with new mobile phones, tablets and headphones.
Facebook
Twitter
WhatsApp
Linkedin
ReddIt
Email
Previous article
Realme 3i to go on its second sale today at 8PM IST
Next article
Pinterest has rolled out a more ‘compassionate search’ for people in distress