According to the company, this is their first 4G smartwatch that is Made in India 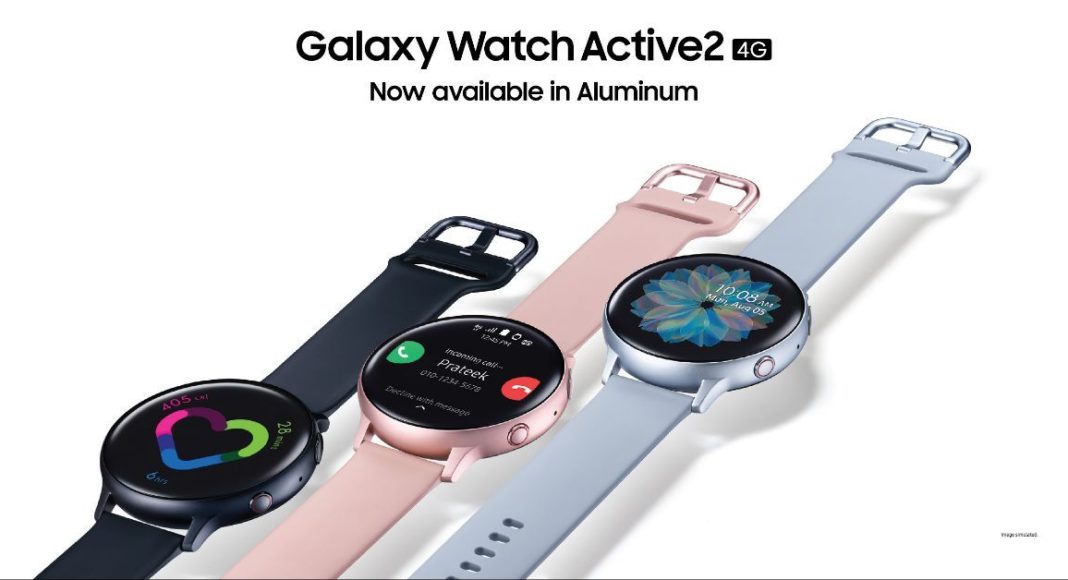 Samsung Galaxy Watch Active 2 was launched in India later in the year 2019. The device was made available in three different sizes of 44mm, 46mm and 42mm and six colour finishes. While expanding its 4G smartwatch portfolio the company has today introduced another new variant of the Samsung smartwatch. Now the tech giant has released the Aluminium edition of the Samsung Galaxy Watch Active 2 4G in the country. According to the company, the device is the company’s first smartwatch under the Made in India initiative.

“The Aluminium edition of Galaxy Watch Active2 4G is our most affordable 4G watch now. It’s also the first smartwatch to be made in India. With Galaxy Watch Active2 4G, we have also started manufacturing our entire range of 18 smartwatches in India as part of ‘Make for India’ program,” said Mohandeep Singh, Senior Vice President, Mobile Business, Samsung India.

Samsung Galaxy Watch Active 2 4G Aluminium edition has been launched in India with a price tag of Rs 28,490. The smartwatch will be available in three colour options of Aqua Black, Cloud Silver, and Pink Gold. The Samsung Smartwatch is scheduled to go on sale for the first time in the country on July 11 via, Samsung Opera House, Samsung.com and leading online portals. On the purchase of the device, the company will be offering 10 percent cashback along with 6 months no-cost EMI offers till July 31.

The new Samsung Galaxy Watch Active 2 comes with a 1.4-inch Super AMOLED display with 360×360 pixels of resolution and Corning Gorilla Glass DX+ for protection. The device offers 1.5GB of RAM with 4GB internal storage of internal storage and is IP68 rated with a maximum pressure of up to 5ATM.

The Samsung Galaxy Watch Active 2 4G Aluminium edition features advanced sensors that can track 39 distinct fitness activities with auto-tracking while the user is walking, running, cycling, rowing, Elliptical Trainer, dynamic workouts and swimming. Over that, it also has a Running Coach that will guide you through seven different running programs also allowing the users to monitor their running pace. While the health sensors on the device include a heart-rate sensor, ECG sensor, accelerometer, gyroscope, barometer, and ambient light sensor. It has e-sim connectivity options that allow users to stay connected, reject or receive calls while your phone is not around. One can also use it to click pictures, record a video preview video clips, switch between front and rear lenses, set a timer and then check the final photo or video while also allowing you to access your social media post. For connectivity, there is 4G LTE, Wi-Fi, NFC, Bluetooth v5.0, GPS, Glonass, Beidou, and Tizen OS. The Samsung Smartwatch equips a 340mAh battery that is claimed to deliver up to 60 hours of battery life.

Komila Singhhttp://www.gadgetbridge.com
Komila is one of the most spirited tech writers at Gadget Bridge. Always up for a new challenge, she is an expert at dissecting technology and getting to its core. She loves to tinker with new mobile phones, tablets and headphones.
Facebook
Twitter
WhatsApp
Linkedin
ReddIt
Email
Previous article
Lenovo Legion gaming phone specification leaked on AnTuTu ahead of July 22 launch
Next article
Xiaomi teases Redmi Note 9 India launch on Twitter: Here’s everything you must know