Samsung to launch Galaxy M31 with a 6,000mAh battery in India on February 25 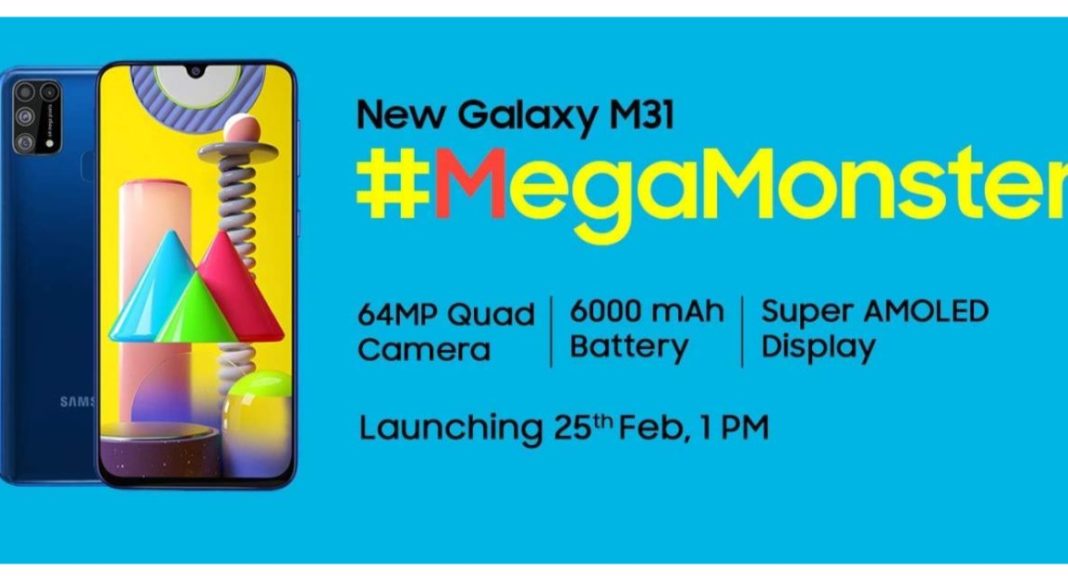 For quite a long time Samsung Galaxy M31 has been part of the rumour mills. Previously, we came across leaks and rumours related to the upcoming smartphone. Under the M series, the company has already launched six devices namely Galaxy M10, M20, M30, M40, M10s and M30s. The smartphone is going to make its debut under the mid-range price segment and is all set to launch on February 25th in India. As per a report, the device will arrive with a starting price of Rs 15,999 and is also supposed to launch in two RAM and storage variants.

According to a report, Samsung Galaxy M31 will be offered in two variants: 6GB of  RAM with 64GB storage and 6GB of RAM with 128GB storage. The company is going to launch the device on February 25th at 1 PM and will go on sale in the country in the first week of March. It is suggested that Galaxy M31 will launch with a starting price of Rs 15,999 for the base model. The device is going to be made available on all the leading stores in the country and on  Amazon and Samsung online store.

Also, recently we came across some of the leaked specifications of the upcoming smartphone. Samsung Galaxy M31 is going to come with a super-AMOLED display. The company has created a dedicated microsite on the e-commerce platform Amazon that reveals its key specifications. According to the teaser, the device is going to feature a Super-AMOLED infinity U  Display. It packs a massive 6,000mAh battery along that is claimed to offer 2 days of battery life.

Galaxy M31 is going to feature a quad-camera setup that includes a 64-megapixel primary sensor. An ultra-wide-angle lens, a microlens for macro photography and a depth sensor for taking portraits. Not much has been said about the Megapixel power of the rest of the cameras. The front will have a single selfie camera in a U-shaped notch. The cameras will have support for low light as well as scene optimizer.

Samsung Galaxy M31 notify me option has already been added to the Samsung India website and some details have been released there.

Komila Singhhttp://www.gadgetbridge.com
Komila is one of the most spirited tech writers at Gadget Bridge. Always up for a new challenge, she is an expert at dissecting technology and getting to its core. She loves to tinker with new mobile phones, tablets and headphones.
Facebook
Twitter
WhatsApp
Linkedin
ReddIt
Email
Previous article
Poco X2 with Qualcomm Snapdragon 730G chipset to go on sale in India today via Flipkart
Next article
The first generation of the Oppo Watch teased, to come with Apple-like rectangular dial